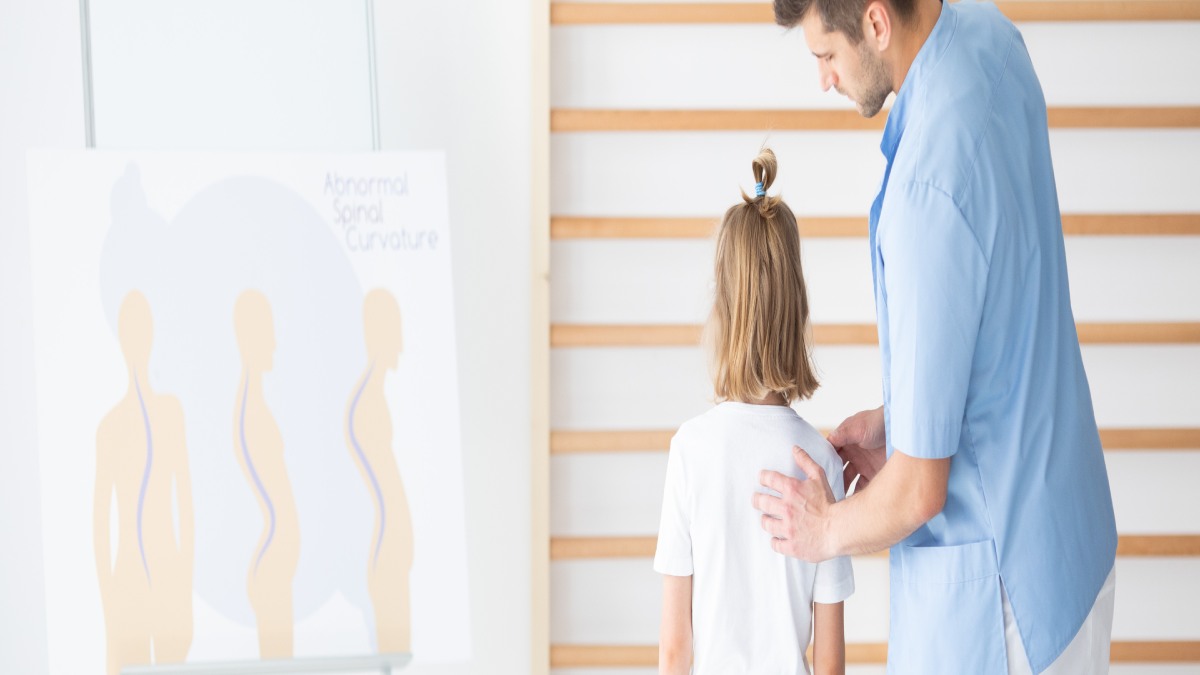 You may have seen many spine of people that the spine runs exactly down the middle. When a person has scoliosis, their backbone curves to the side.

Scoliosis is a medical condition in which a person’s spine has an indirect (sideways) curve normally the curve is C or S-shaped. It can affect any portion of the spine. It occurs most often during the growth spurt just before adolescence.

There is a normal spinal curve when observing from the side, but the spine should appear straight when looking from the front. In some, the degree of curve is stable, while in others, it progresses over time. Mild scoliosis does not typically induce problems, but severe cases can interfere with breathing. Typically, no pain is present.

Scoliosis is about two times more common in girls than boys. It can be seen at any age, but it is most prevalent in those above 10 years of age. there is no correlation between the severity of the curves from one generation to the coming up generation.

Some fast facts are here about scoliosis;

There are many signs and symptoms that indicate the possibilities of scoliosis. it is good take an early oppointment to your Dr after you have see any single symptom. Most of the scoliosis patients are coming with having back pain. Symptoms associated with scoliosis include;

The change in the curve of the spine typically occurs very slowly so it is hard to recognize until it becomes a more severe physical deformation. in most circumstances, scoliosis is not painful, but there are certain types of scoliosis that can cause back pain, rib pain, neck pain, muscle spasms, and abdominal pain.

scoliosis can be cause many of the reasons. Some possible causes may include;

Some other syndromes that may cause scoliosis.

This is a sort of deformity that begins and grows because of the collapse of the vertebral column in an asymmetrical way. As bones start to convert weaker and the ligaments and discs placed in the spine convert worn as a result of age-related changes, the spine starts to curve.

above mentioned syndromes may causes scoliosis.

The first step your doctor recommended for the confirmation of scoliosis are;

It is usually confirmed by the following imaging test;

How scoliosis can be Treatment?

Scoliosis can be treated by:

Wearing a brace won’t restore scoliosis or provide complete relief but it usually to restricts additional progression of the spine curve.

It is made up of plastic. Bracing involves fitting the person with a device that covers the torso; in some cases, it continues to the neck. According to the AANS, a person with scoliosis may need to use a brace if they’re still growing and the curvature is longer than 25 to 40 degrees. For optimal effectiveness, the brace should be checked regularly to assure a proper fit and may need to be worn 16 to 23 hours every day until growth stops.

There are 2 types of braces;

If the scoliosis still in progression your doctor might recommend surgery to prevent it from getting worse. The most common surgery is spinal fusion.

Spinal fusion; this is attempted through the back while the patient lies on his or her stomach. During this surgery, the spine is aligned with rigid rods, followed by spinal fusion. Spinal fusion involves adding a bone union to the curved area of the spine, which creates a solid connection between two or more vertebrae. The metal rods attached to the spine secure that the backbone rests straight while the spinal fusion takes effect. This procedure usually takes several hours in children, but will generally take longer in older adults.

The two main types of surgery are:

Are there any home remedies for treating scoliosis?

Although it will not stop scoliosis but benefits and improving your health.

Is there any other treatment option for scoliosis?

Yes, Chiropractic treatment is an option although it is not a cure but provides some relief or resolve the curvature. Improves the quality of life. they maintain that realigning the spine will promote healing and well-being. Receiving chiropractic treatment from a nonspecialist can make symptoms worsen.

Is it possible to prevent scoliosis?

No, there is no cure for scoliosis,  Researchers are trying to find the causes of the different types of idiopathic scoliosis. This will hopefully lead to better treatments or a cure but still there is no prevention present for scoliosis.