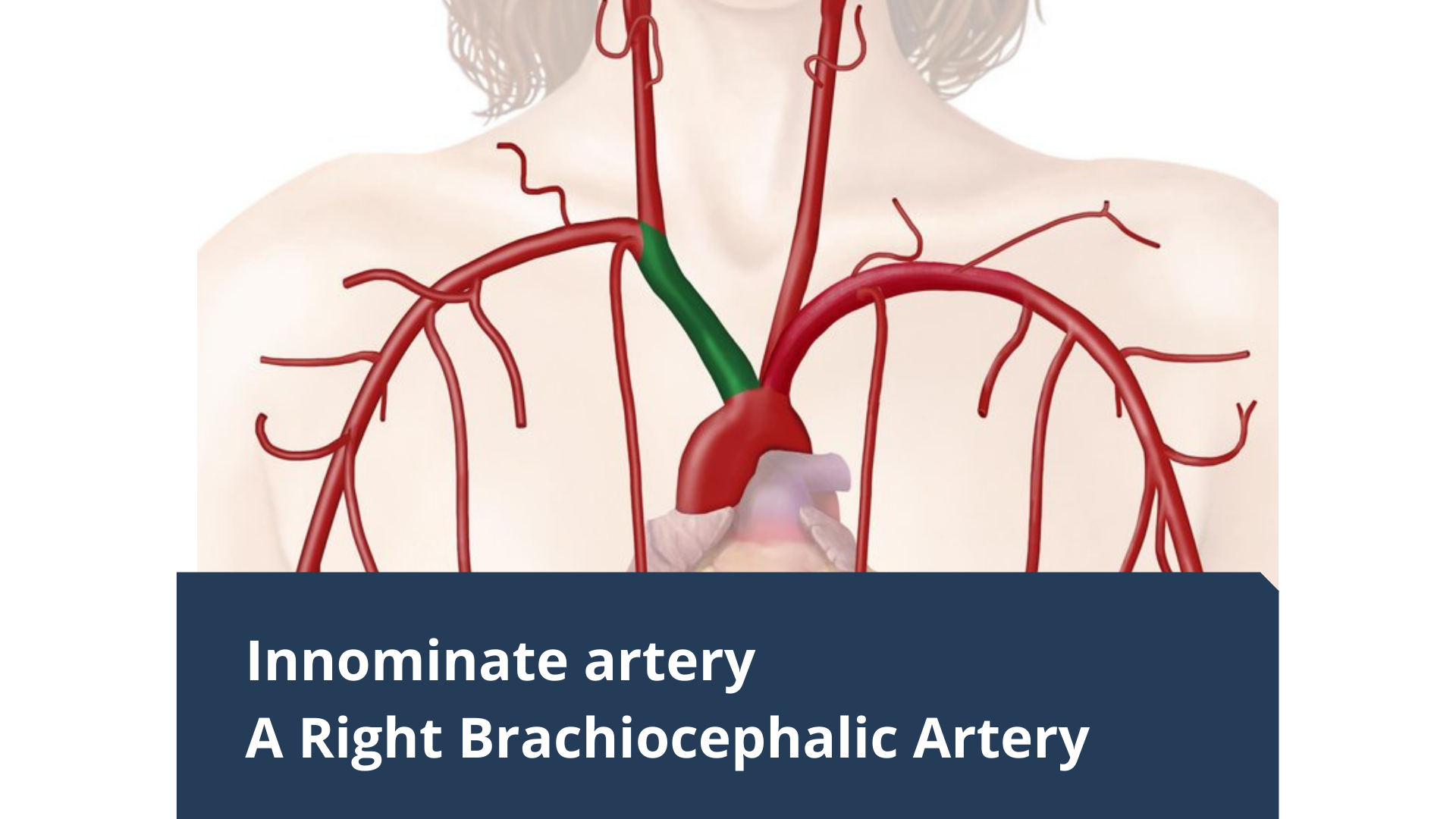 Innominate artery is another name for the right brachiocephalic artery or the brachiocephalic trunk, it is one of the largest arteries of the mediastinum that supplies blood to the upper right extremity, head, and neck. The innominate artery is the first branch of the aortic arch which is later divided into the right common carotid (which is one of the main blood supplying arteries to the head and neck) and right subclavian arteries (which supply blood to the right upper extremity). While the left common carotid artery and left subclavian artery directly come from the aortic arch.

The innominate artery varies greatly in size and arises from the beginning of the aortic arch anteriorly to the left carotid artery, at the level of the upper border of the 2nd right costal cartilage.

The right brachiocephalic artery is also in contact closely with the thymus, which typically sits superior to the artery and separates the artery from the posterior surface of the manubrium

In infants, it often splits cephalad to the sternoclavicular articulation, within the anterior triangle of the neck.

After division, the right subclavian vessel goes on to supply the entire blood to the right upper extremity as well as collateral circulation of the head through the right vertebral artery. While the right common carotid artery splits into the external carotid and internal carotid arteries, which provide a large range of the blood supply to the head and neck.

The innominate- brachiocephalic artery usually gives no branches, but a small branch of the thyroid ima artery arises from it. Sometimes, it gives off a thymic or bronchial branch to compensate for deficiency or absence of one of the other thyroid vessels.

The right horn of the aortic sac or the innominate artery fuses with the right-sided 3rd and 4th aortic arches, which give rise to the right common carotid artery and the right subclavian artery respectively.

The vagus nerve, and it branches the right recurrent laryngeal nerve, pass closely to the innominate artery.  The vagus nerve runs directly anterior to the division of the innominate artery, on the other hand, the right recurrent laryngeal doubles back posterior to the division and passes anteriorly to the larynx.

The complex embryology of the aortic arch and the great vessels with numerous natural variations is the great interest in clinical perspective. The most common aortic arch branching design variant is known as a bovine arch.

This bovine arch variant is when both the right and the left carotid artery, along with the right subclavian artery share a common trunk, dominantly making the innominate artery have three branches instead of two. This bovine arch variation is found in approximately up to 14% of the whole world population, and findings may suggest that this variation is higher than average in those of African than Asian descent.

Due to its physiological and anatomical variance here are some complications;

What Are The Surgical Considerations of Right Innominate Arteries?

Due to its great vessel, anatomic variations and prominence could be problematic in the superior thoracic cavity procedures. The innominate –brachiocephalic artery should always be taken into attention when operating inside the thoracic cavity, especially for the superior mediastinum procedure.

In aortic repair procedures, innominate artery cannulation has become a highly used method for maintaining cerebral perfusion over historical time. There are no postoperative neurologic complications, and innominate artery cannulation has several benefits such as less operative time, no need for an additional incision, reduced risk of brachial plexus injury, and naked  visualization of the artery during the procedure

The innominate artery or right brachiocephalic artery is the first and largest branch of the aortic arch, which is divided into the right common carotid artery (supply neck and head) and the right subclavian artery (supply right extremity). It usually has no branch but a small branch of the thyroid ima artery may be found in some people to compensate for the deficiency or absence of other thyroid vessels. Because of its great anatomic and physiological variations, it can be problematic in superior thoracic cavity procedures. So innominate arteries should always be taken into attention while operating inside the thoracic cavity.