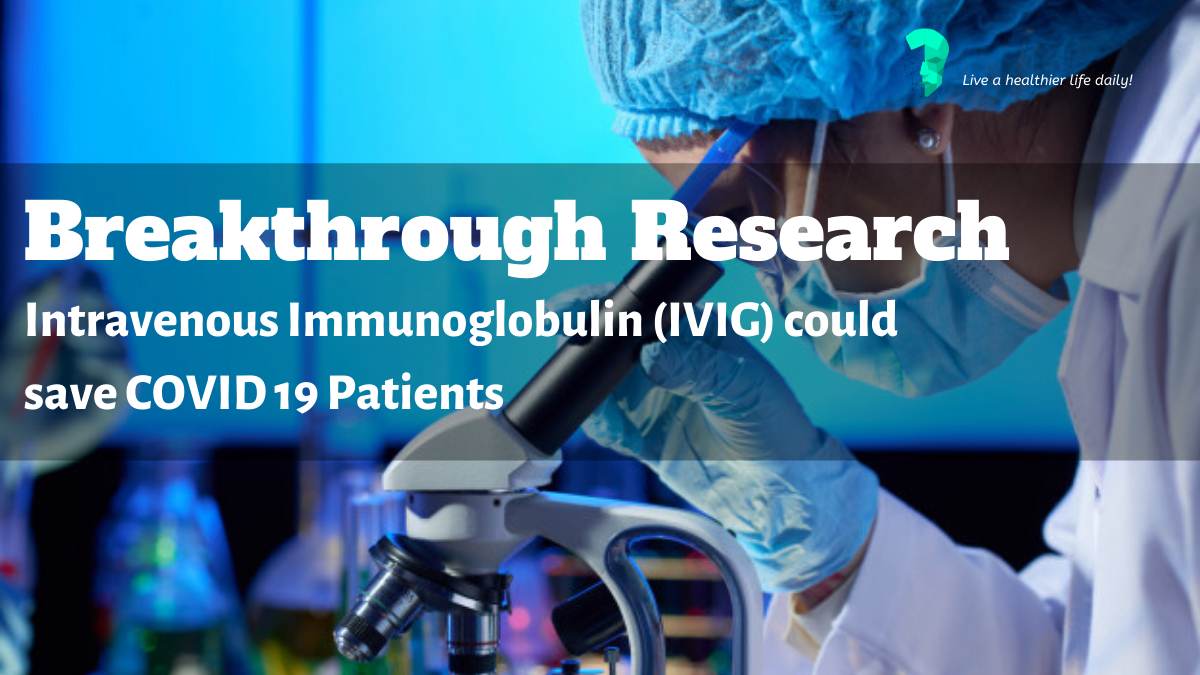 Pakistanis scientists achieve a significant breakthrough in the fight against COVID 19. DOW university’s research team has prepared intravenous immunoglobulin (IVIG) with plasma obtained from recovered patients of coronavirus through which COVID 19 victims can be treated.

We heard a lot about this achievement by Pakistan. Let’s discuss below what is immunoglobulin.

SIGNIFICANT BREAK THROUGH BY DOW UNIVERSITY OF HEALTH SCIENCES:

DOW University’s research team has developed intravenous immunoglobulin (IVIG) with plasma collected from recovered patients of coronavirus through which they can treat COVID 19 patients. Vice-chancellor of DOW University of health sciences Prof.Dr.Saeed Quraishy said it is a very important breakthrough in the war of COVID 19.

The team was able to get a first blood sample in March 2020 and managed to separate bodies chemically, purified it, and later concentrated the antibodies using the ultrafiltration techniques that eliminate the remaining rejected materials from the final product. This is the first global report of isolation, formulation, and safety demonstration of immunoglobulin purified from recovered COVID 19 patients and can be the light of string in this time of crisis when the whole nation expects national researchers to come ahead and serve the nation.

The laboratory testing and safety trial of the formulated product which was done in animals has been successful. The principal of DOW College of Biotechnology Dr. Shaukat Ali and his efforting team deserves an appreciation by the government and local people. Still their drive to collect further blood donations is continued and in parallel they are working on scaling-up their production process.

Already six world-renowned multinational companies have joined hand to proceed in a similar direction to produce IVIG from recovered patients; in the regard DOW university has taken lead in developing the first local IVIG against the strain causing COVID 19 diseases in Pakistan.

Immunoglobulin is also known as an antibody, which is a glycoprotein in nature and secreted by plasma cells (WBCs).  They act as an immune response to a foreign invasion called an antigen, like viruses and bacteria. It works by recognizing, binding and neutralizing or burst the antigen. The antibody immune response is highly complex and excessively specific.

The immunoglobulin domain is a large, Y-shaped protein that consists of four polypeptide chains with two identical heavy chains and two identical light chains and connected by a disulfide bond. Ig domain contains about 70110 amino acids and categorized into different classes according to their size and function. The immunoglobulin protein domain consists of 2 layer sandwich with 7-9 antiparallel B- stands, arranged in two B-sheets. The Y-shaped protein consists of 6 regions;

There are 5 placental mammal antibodies isotypes known as IgA,  IgD, IgE, IgG, and IgM. They have the same “Ig” prefix with different biological properties, function, location, and ability to deal with different antigens. The different suffixes of the immunoglobulin isotype indicate the different heavy chains.

Neutralization: it is an antigen-antibody reaction in which antigen receptors is blocked by antibody and make it ineffective. This process can be reversible.

Agglutination: It is an interaction between antigen and antibody in an equivalent proportion which results in the invisible clump, which are attractive targets for phagocytes.

Precipitation: It is a serum soluble reaction based on antigen and antibody which exist in optimal proportion and makes insoluble products like precipitation, which is also a sweet target for phagocytes.

Complement activation or fixation: It is also called as complement cascade in which immune system enhanced or complement the antibody and phagocytes to clear pathogens and damage cell from an organism in two ways;

Intravenous immunoglobulin is a blood product derived from serums of between 1000-1500 individuals by the passive immunity process. It is a choice of treatment for peoples with immunodeficiency and to treat a number of health conditions like;

one understandable mechanism includes the possibility that donor antibodies may bind directly with the abnormal host antibodies, stimulating their removal; the possibility that IgG stimulates the host’s complement system, leading to enhanced removal of all antibodies, including the harmful ones; and the ability of immunoglobulin to block the antibody receptors on immune cells (macrophages), leading to decreased damage by these cells, or regulation of macrophage phagocytosis. Indeed, it is becoming more clear that immunoglobulin can bind to a number of membrane receptors on T cells, B cells, and monocytes that are pertinent to autoreactivity and induction of tolerance to self.

Some believe that immunoglobulin therapy may work via a multi-step model where they introduce immunoglobulin a type of immune complex in the patient. Once these immune complexes are formed, they can combine with Fc receptors on dendritic cells, which then mediate anti-inflammatory effects helping to reduce the severity of the autoimmune disease or inflammatory state

Side Effects of Immunoglobulin Therapy:

Although immunoglobulin therapy is generally considered safe but can have severe side effects like;

Immunoglobulin therapy can also interfere with the natural ability of the body to produce a normal immune response, that can result in falsely elevated blood glucose level and interfere with IgG-based assays.

The therapeutic effects of IVIG go beyond antibody replacement in those patients with antibody deficiency.

IVIG is an approved treatment for;

How it is prepared?

Through this method immunoglobulin is prepared after separation of antibodies found in the blood of recovered patients from the corona.

This process only can be done in hospitals.

Is immunoglobulin method the same as plasma therapy?

No, it is different from plasma therapy and it should be noted that the treatment by hyper immunoglobulin (HIVIG) is approved by a US federal agency for normal conditions.

How safe is treatment of immunoglobulin?

This treatment of immunoglobulin is safer and more effective than plasma transfusion as it does not carry the bacterial and viral pathogens.

What happens if this treatment does not work for me?

All kinds of immunoglobulin therapy are effective, but if a person may develop some kind of side effects. Many kinds of IVIG are available. Talk with your doctor, he can try to find a product that works most beneficial for you.

Pakistan has lead the efforts against the novel coronavirus COVID 19 by first isolating the SARS-COV-2 virus by genome sequencing, then discovering human genes resisting the virus, and now has isolated and purified the antibodies composed of immunoglobulin’s fraction of the plasma of the recovered patients.