Difference between Agraphia, Alexia and Aphasia

All three of these disorders are caused by damage to language processing centers in the brain. 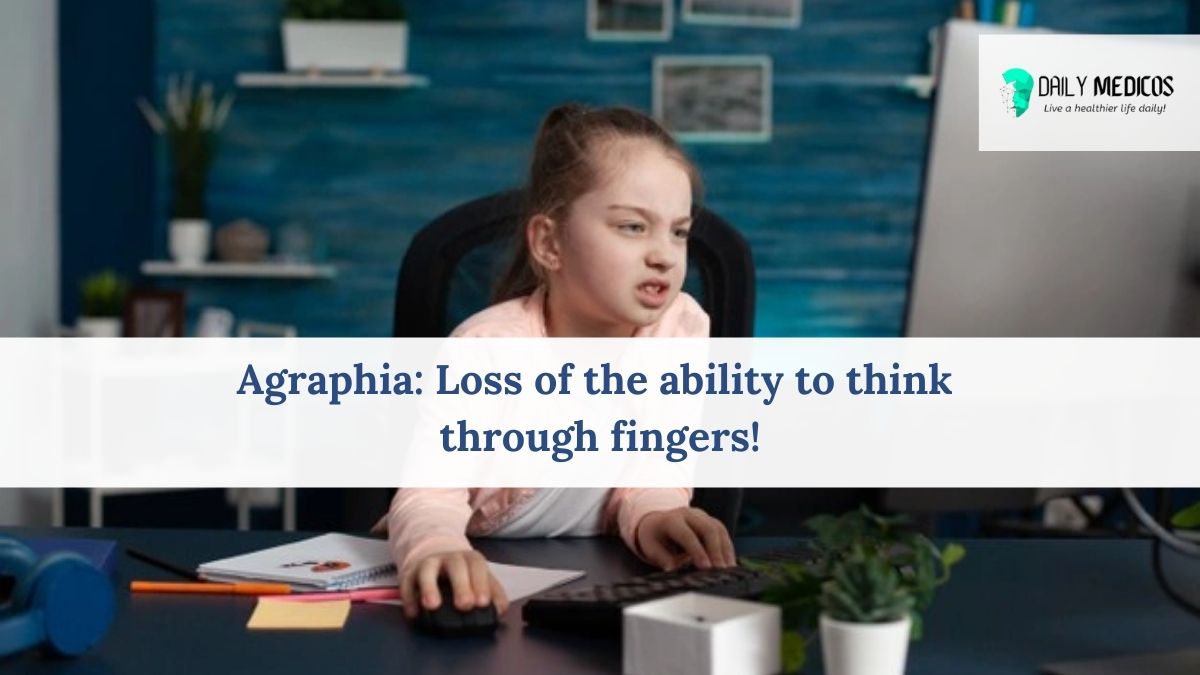 There are two types of agraphia.

When it comes to determining the best treatment for agraphia, proper characterization is essential.

Alexia with agraphia is a disability that affects reading and writing abilities. It is often associated with aphasia, but it can also occur on its own. As a result of thalamic lesions, cortical cognitive deficits, including alexia with agraphia, can occur. They may be able to sound out a word, but they no longer have access to the part of their orthographic memory that stores all of the world’s letters.

Agraphia can be caused by an illness or injury that affects the areas of the brain that are involved in the writing process.

Language skills are found in the parietal, frontal, and temporal lobes on the dominant side of the brain.

Most Common Causes For Agraphia

You may lose your ability to write if a stroke disrupts the blood supply to the language areas of your brain. Researchers stated that language disorders are a common side effect of a stroke.

The Centers for Disease Control and Prevention (CDC) defines a traumatic brain injury as a blow or jolt to the head that disrupts brain function.

Agraphia can occur due to any injury to the brain’s language areas, whether it is caused by a fall in the shower, a car accident, or a concussion on the soccer field.

Some researchers believe that aphasia that gets worse is among the earliest signs of dementia.

Many types of dementia, including Alzheimer’s, cause people to lose heir ability to communicate clearly in writing and their ability to read and speak as their condition progresses.

This is usually caused by atrophy (shrinking) of the brain’s language areas.

Within the brain, a lesion is an abnormal tissue or damaged area. The normal functioning of the area in which lesions appear can be disrupted.

The researchers stated some brain lesions to a variety of factors, including:

What are the signs and symptoms of agraphia?

The signs and symptoms of agraphia differ depending on which part of the brain is affected; some possible symptoms include:

How can agraphia be diagnosed?

Diagnosis of Abulia is established by handwriting analysis.

What should a person do if he thinks he is suffering from agraphia?

The first step is contacting your care physician when you find any of these symptoms. There isn’t a single type of doctor who specializes in Agraphia diagnosis and treatment. The doctor may refer the patient to a specialist, such as a neurologist specializing in brain and nervous system diseases.

What is the treatment of agraphia?

Agraphia may be the primary clinical disturbance or a symptom of another disorder that requires diagnosis and treatment, depending on the etiology. Depending on the patient’s motivational and neuropsychological status, interventions will be needed.

What is the pathology behind agraphia?

Acquired agraphia is a term used to describe deterioration in writing ability that is not caused by a primary sensory or motor dysfunction (such as blindness or paralysis). Agraphia is usually linked to lesions in the cerebral cortex, but no specific “writing centers” like Wernicke’s or Broca’s areas for speech have been identified.

There are two types.

Linguistic agraphia is more common and usually occurs with oral language problems. Letter omissions, substitutions, additions, and reversals are used to diagnose these disorders of written spelling, while the actual letter morphology is preserved.

Apraxic agraphia is a type of agraphia in which the letters are formed incorrectly with intact spellings. The term ‘apraxia’ refers to a motor execution disorder that can include a breakdown in letter morphology and movement sequencing.

Visual perceptual dysfunction causes spatial agraphia. Changes include slanting the line of writing away from the horizontal, widening the left-hand margin, and letter repetitions.

All voluntary movements are affected by Parkinson’s disease, but handwriting appears to be particularly vulnerable, as it is frequently the first symptom of the disease. Higher-order handwriting programming is not disrupted, such as increased spelling or stroke errors.

Instead, handwriting problems include slowing, loss of accuracy, and a reduction in letter size, the latter of which is what the term micrographia refers to. In addition to overall smallness, micrographia can include progressive diminution of letter size as the patient continues to write.

Parietal-temporal alexia, angular alexia, central alexia, and semantic alexia are all synonyms for this syndrome.

The distinction between pure linguistic apraxia and pure apraxic agraphia has long been a significant diagnostic barrier. Certain techniques may aid in the differentiation of these two entities:

In pure apraxic agraphia, calligraphy is frequently impaired. As a result, several authors have proposed that intact calligraphy indicates pure linguistic agraphia. However, it is unclear whether central agraphia with nonfluent aphasia can isolate calligraphy involving linguistic processes.

In linguistic agraphia, oral spelling, which is considered a non-motor modality of “writing,” may be affected, but in apraxic agraphia, it is intact.

Because writing praxis is intact, writing that improves with copying written text may be useful in identifying pure linguistic agraphia.

The non-motor modalities of writing, such as typing and texting on a mobile phone, maybe preserved in pure apraxic agraphia but impaired in pure linguistic agraphia.

In clinical neuropsychological writing assessments, pseudowords and irregular words are written to locate disruptions in “phonological” and “lexical” processes, respectively. If writing impairments are limited to these specific linguistic features, such techniques may help identify pure linguistic agraphia.

Agraphia can be defined as an isolated impairment of writing that is not accompanied by any other language or praxis impairment.

When disruption to central linguistic processes involved in writing causes an isolated impairment in written language, this is known as pure linguistic agraphia. The ability to communicate verbally and to read is unaffected. In writing, there may be semantic and orthographic errors. Dyscravia is a less well-known disorder of phoneme-to-grapheme conversion in which written words are misspelled by substituting proximate sounds, such as a “t” for a “d”; dyscrasia is a subtype of phonological agraphia.

Findings in some cases of pure apraxic agraphia can be as subtle as a selective impairment in fonts, such as cursive script (“allographic agraphia”), or a case of apraxic agraphia (such as an isolated inability to write in upper-case).

Agraphia is the loss of writing ability. It can be caused by:

Although some types of brain damage are irreversible, people who consult with therapists to re-learn how to plan, write, and spell with greater accuracy may gain some of their writing abilities.