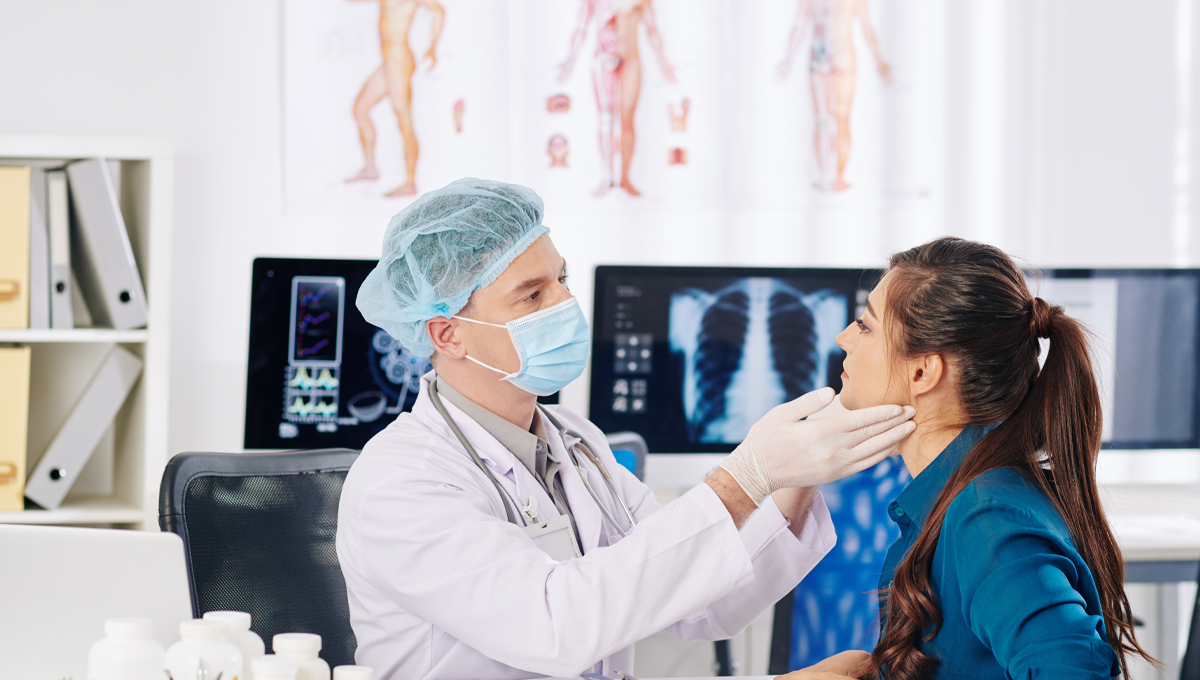 Adenoid cystic carcinoma is the abnormal growth of tissues, and it may consider as rare diseases. In this context, you will find out about the enlargement of adenoids and the things that can changes body physiology by signal the problems that are needed medical care. This content will help you to learn about causes, symptoms, and different types of enlargement of adenoids. Standard tests, procedures, and imaginary scans also discuss in detail for differential diagnosis of adenoid cystic carcinoma that helps the doctor to find the actual cause of diseases.

Adenoid is the tissue patch that finds a high place in the throat just beyond the nose in the roof of the nasopharynx. Adenoids are the tonsils, but keep in mind not all the tonsils are the adenoids, and these are part of the lymphatic system that helps from infections and keep your body fluid in the stable. Adenoids are also referred to as pharyngeal tonsil and nasopharyngeal tonsils. Adenoids are the mass lymphatic tissue. The primary function of adenoids and tonsils is to trap the germs that come through from the mouth and nose.  In infants, adenoid forms a soft mound at the back wall of nasopharynx behind the uvula. Often the term also used to show adenoid hypertrophy means enlargement of an adenoid that referred to abnormal growth of pharyngeal tonsils.

Adenoid is the tonsils or clusters of the lymphatic tissue behind the nose and just high above the roof of the mouth. It can easily be seen by looking into someone’s mouth. According to the National Health Service, adenoids are at their most significant in the age of 3-5 years, and they begin to shrink at the age of 7-8 years, and this is visible by the teenage and entirely gone at adulthood.

Mostly adenoids are covered with mucus and cilia, and these small hairs spread the mucus below the pharynx. This mucus moves to the stomach by engulfing it to capture the infectious bacteria, dust, and other particles. Adenoids also help to create the antibodies for the protection from sickness because tonsils are considered as a first-line defense for the immune system.

What are enlarging Adenoids?

Enlarged adenoid is also named adenoid hypertrophy, and this is common in children. Enlarged adenoids are the adenoids that are puffier because adenoids trap the infectious bacteria that weaken the immune system to get into your body and temporarily swell. Sometimes this swelling becomes better, but sometimes it becomes infected.

What can cause enlarged adenoids?

Adenoid hypertrophy makes it difficult or hard to breathe through the nose and your child ends the breathing through the mouth only. The breath through mouth cause:

An adenoid cystic carcinoma is an abnormal form of malignant neoplasm (abnormal growth of the tissues). This is the rare form of the disease, which is named adenocarcinoma (the cancerous type that begins in glandular tissues). Adenoid cystic carcinoma is mainly found in the head and neck, but sometimes it occurs in other sites in the body such as women’s uterus or breast. Most commonly adenoid cystic carcinoma comes within secretory glands that are consist of clusters of cells that are secreting the saliva through the upper aerodigestive tract (this includes tissues and organs of the upper respiratory tract that contain mouth, lips, tongue, nose, throat, and vocal cords).

The most common major or minor salivary glands of the head and neck where the tumors begin are:

What are the Stages of Adenoid Cystic Carcinoma?

Staging is the method that describes the location of the cancerous tumor, spreading of the tumor, whether it affects the other body part or not. Your doctor is using diagnostic tests to evaluate the stages of cancers. The methods of steps are not finished until all tests are done appropriately. There are lots of staging systems available, but the most appropriate description of adenoid cystic carcinoma is the TNM staging system.

These are the TNM staging systems that are used to identify the adenoid cystic carcinoma that helps your doctor to diagnose the diseases and scan the reliable answer.

The people who are suffering from adenoid cystic carcinoma, they experience signs and symptoms while some do not experience any sign and symptoms. The causes of the ADCC symptoms are different due to every person’s physiology and medical conditions, and the beginning signs of adenoid cystic carcinoma generally depend on the size or location of the tumor.

The mass of the salivary glands is shown painlessly because of slow-growing lesions in the mouth or faces. There are salivary glands present under the mucosal lining of the throat, sinuses, and mouth. The other sign and symptoms include:

If the person with adenoid cystic fibrosis seen any sign or symptoms and any changes you can observe you should concern with your doctor then your doctor evaluate you and ask you about how often you may experience any symptoms and how long they stayed:

What is the diagnosis of ADCC?

Your physicians recommended many tests to diagnose the lesion or mass, and they also evaluate if they spread in other parts of the body or not and where they start to grow. There is a wide variety of tests recommended for the ADCC patients, but it depends on the patient condition or severity of diseases. Not all the tests are used to diagnose every person. You doctor considered the following factors before choosing the diagnostic test, these are:

These are the major query that is asking your doctor before suggested any test while besides physical examination also played a vital role to suggest the test and following are the tests used to diagnose the ADCC:

Imaging tests techniques primarily helps your doctor to evaluate the clear picture of organs. It consists of three main imaging tests which
i. Computed tomography (CT scan)
ii. Magnetic Resonance Imaging (MRI)
iii. Positron Emission Tomography (PET scan)
These all are imaginary tests that help to determine the spreading of tumors in other parts of the body.

CT scan helps your doctor to diagnose the adenoid cystic carcinoma because computed tomography creates three-dimensional structures or pictures inside of the body by using X-rays that are taken from different sites of angles. Then the computer compares all images in detail. The cross-sectional images help your doctor to see the abnormalities or lesions. Sometimes contrast medium is also used, which is also known as a special dye before doing a CT scan to see more detail in these images. This special dye is induced in a patient’s vein or sometimes also given as pills to swallow.

MRI helps your doctor to use magnetic fields but not x-rays. It provides detailed guidance images of the body to your doctor that helps to measure the size of tumors. In MRI contrast, medium (a special dye) is also given to evaluate the clear picture that is injected in the vein of the patients or also given as a pill to swallow. MRI proves very beneficial for identifying the perineural spread (tumors growth along nerve branches) of adenoid cystic carcinoma.

PET is also known as PET-CT scan because it is mostly combined with a CT scan. PET-CT scans the amount of radioactive sugar injected in the body of patients, and this substance of sugar is taken up by the cells that use the energy because cancer uses energy effectively. It has the ability to absorb radioactive elements. PE-CT can help to detect the substances to evaluate the images of the inside of the patient’s body.

A biopsy is a diagnostic test for the removal of tissue for examination under a microscope. MRI, CT scan, or PET is the test that only suggested the presence of cancer, but a biopsy is the appropriate diagnostic test that gives a definite diagnosis. After the results of the biopsy, pathologists interpret the laboratory test by evaluating the cells. It can be performed by the help of using a fine needle that is known as needle aspiration or sometimes surgical removal of a part of the tumor. Adenoid cystic carcinoma is classified by its distinctive pattern in which infiltrate ducts, glandular structures, or epithelium cells surround the organ.

After completion of the diagnostic test, your doctor carefully reviews all differential diagnoses and discusses all of the results in detail. If once the diagnosis is cancer or tumor, then it also helps your doctor to identify the staging of cancer.

ADCC is a rare form of the disease that is mainly found in the head and neck but sometimes occurs in different sites of the body. Generally, there is no advanced staging system introduced to evaluate the ADCC, but TNM system is mostly used to diagnose these diseases. This is the slow-growing lesion, and often a mass of salivary glands is painless while the other symptoms of ADCC are numbness, hoarseness, nodules appearance, and facial nerve paralysis. Adenoid cystic carcinoma is diagnosed with the help of appearing signs and symptoms, suspected type of cancer, age, and medical of the patient, and the result of performing the test. Surgery is considered as first-line treatment for ADCC even though radiation and chemotherapy are also recommended for the patients.