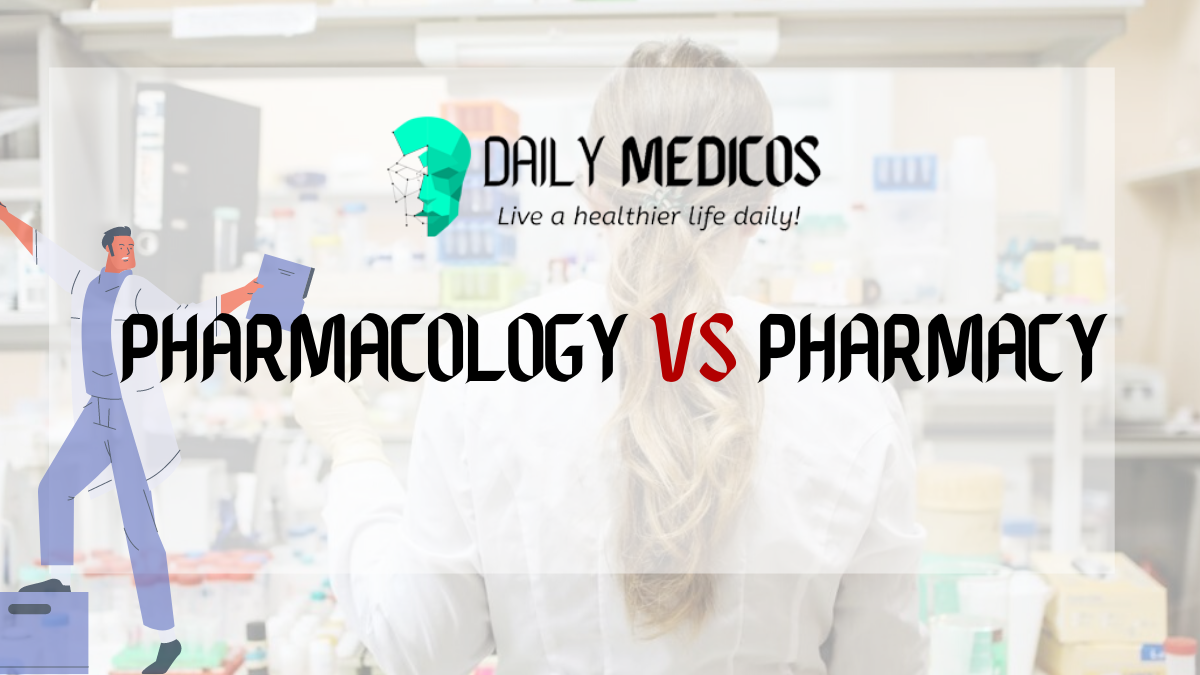 pharmacology vs pharmacy, Correlated terms and terminologies that belong to the same fields also stand alone in many places. Correlation between terms is due to some familiar points shared between both terms. However, it cannot be used in place of each other.

Let’s have an example, Physician and specialists are generally known by the common public as Doctors. Even these Two-term 1,e physician and specialists are very different but still have few similarities too. It does not mean that physicians can take over the role of a specialist just because he can also term himself as a doctor. The difference between them will remain the same and the duties and responsibilities cannot be performed by another one on the bases of similarity of the medical field

Same in the case of pharmacology and pharmacy. Both terminologies are related to the field of medicines but have a vast area of focus individually and too different from each other. This article emphasizes the difference between them in general and a brief manner to enhance understanding of the general public.

Pharmacology Vs pharmacy … A Clear Comparison To Avoid Confusion

We Initiate our Pharmacology vs pharmacy comparison with definitions. It will prominently mark their individual status and value in the field of medicines and medicinal sciences.

The pharmacy can be defined as the science or practice of preparation & synthesis of medicines as well as accurate compounding and dispensing to eliminate the disease by giving its therapeutic effects to the patient.

It is itself a vast domain that includes 5 main subfields or departments.

These 5 departments work together in coordination to maintain the safety and quality of the drug. Right from its manufacturing until the consumption of the last dose of a drug, Efforts have been made to keep up its stability. It is combined efforts of all these departments to provide a safe drug  in an effective way

It is important to note that Pharmacology is a subfield in the domain of pharmacy. It itself a part of pharmacy pharmaceutical sciences

Pharmacology can be defined as a branch of medicine that deals with uses. effects, side effects, and mechanism of action of the medicinal drug. it is also an extensive branch that further divides into

Some Astonishing Facts About Pharmacology vs pharmacy

Students looking for making the right decision about their education, in choosing degree programs and for selection professional career field must go through these facts about pharmacology and pharmacy. These facts level the prominent difference between them in terms of career aims and opportunities.

Pharmacology and pharmacy, although both are related to medicines but have some sharp difference that should be concerned

Pharmacy cover the entire field of medicines, It includes all the knowledge and basics about the medicines

The area that pharmacy covers are so vast as compare to pharmacology. It is summarized as

Students of pharmacy have must cover each and every aspect of medicine during their degree program.

In comparison with pharmacy, Pharmacology is not as broad and vast as pharmacy  But the most surprising fact is that it demands more professional experience and skills. Although it deals only with drugs and its effect on the body or vice versa but still a very responsible profession. The area of focus under subfield of pharmacology are

The field of pharmacology demands very deep information about medicinal drugs. A slight mistake can create a life-threatening situation for the patient.

In Accordance with the skills and professional knowledge of pharmacological and pharmacist. Their job and career opportunities become specific and more particular so that they can serve their field with more satisfaction and expertise.

Pharmacologists focus more on the science of medicine. they have job descriptions in

Pharmacists focus more regards the manufacturing, analyzing, formulating the drugs. They are responsible to assure the quality and stability of medicinal drugs. They make it compulsory that drugs must retain their therapeutic value and stability during transportation and storage. The job opportunities of pharmacist include

Pharmacologist Vs Pharmacist: Salaries and income

Expected Salary for a pharmacologist

There is no particular data available to make an estimation of pharmacologist salary however it is reported by the scientists working in the United States that the average salary for pharmacologists is $151,700. This salary also raises as a pharmacologist increases its experience by practicing and pursue his career to achieve a Ph.D. degree in pharmacology.

Expected salary for a pharmacist:

This article emphasizes marking the worth of pharmacologists and pharmacists under the title of Pharmacology Vs pharmacy. it will hopefully act as career guidance for students who want to pursue their career in the field of medicines and medicinal science