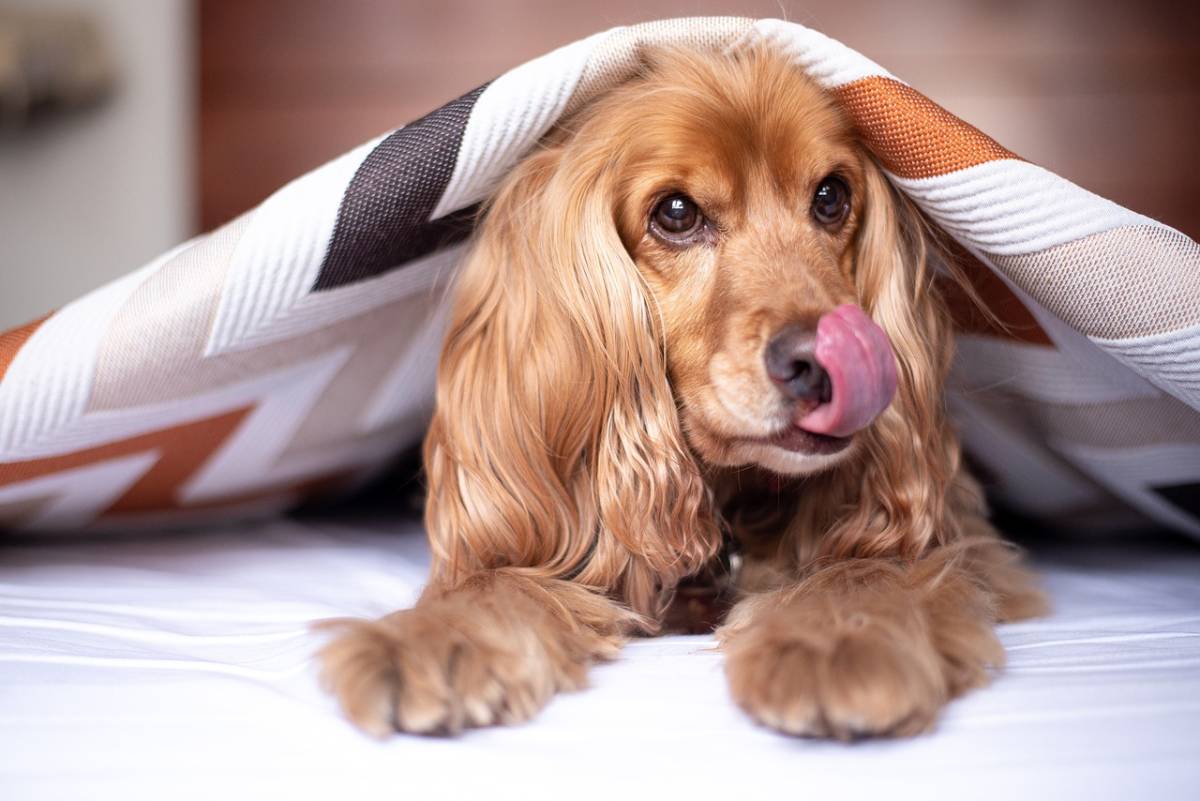 Dogs lick pus or wounds to transmit the rubbing feeling through nerves to block the pain sensations. Licking the wound side can trigger the brain that temporarily insensates the pain. Another good reason dogs lick pus or wound is to clean the debris and bacteria.

However, dogs lick pus or wound of their owners if they have any injury and it is open. The dogs start licking pus or wounds to give relief in as best possible way to the owner, but you shouldn’t let him do this as your wound might get infected by bacteria present in his mouth.

Licking wounds or pus can lead to overgrowing of many other bacteria. Dogs’ saliva has some mild antibacterial effects, but it does not mean that it is effective for every type of bacteria that grows on the wound. This means dog saliva does not help to clean and heal the wound.

Dogs lick pus or wounds as it can give them a soothing effect to their pain. Still, licking wound is mildly affected on only two types of bacteria, Escherichia coli, and Streptococcus canis. Unfortunately, it is not a good idea to allow your dogs to lick pus or wound

Dogs do not use their hands and legs to hold the wound and clean it. Dogs use their tongues as a tool to clean and lick the wound.

Sometimes wound licking can lead to unnecessary infection and tissue damage. Whenever the dogs face any injury or wounds that need cleaning, dogs use their tongue to relieve their wound by licking it.

The natural behaviors are not always right and helpful for the wound. The dog’s saliva is not sterile so it is not allowed to lick on the wound.

The bacteria present in dogs’ mouths do not cause any harm and sickness to humans as they are not zoonotic. Dogs have some hide bacteria in the mouth but totally depend on their diet and habits.

If the dog is clean and does not pick up from dining, trash, and poo, so it does not cause harm to you.

Some dogs have bad habits to pick dead animals and poo so that they can cause serious sickness from these sources to health, and if the dogs lick pus or wound, it causes severe infection to the wound site.

Is a Dog’s Mouth Cleaner Than a Human’s Mouth?

Dogs’ mouth doesn’t need to be always dirtier than humans. However, there are some other bacterias that grow in dogs’ mouths. Dogs’ mouth also has bacteria as humans, but it totally depends on the dental care and diet of the pup.

However human’s mouth contains the bacteria Porphyromonas gingivitis, and dogs have Porphyromonas gulae to fight with. If the dogs lick pus or wounds with a clean mouth so comparatively, it is not harmful but you should stop the dog.

How to Prevent the Dogs From Licking?

According to the myth, dog saliva has some antibacterial properties that can benefit their wound when dogs lick pus.

However, some vet has convinced the dog owners that licking is likely to harm the dog’s wound rather than a benefit. Here are some methods to prevent the dogs from licking;

The inflatable collar can fix the dog’s neck to limit the turn and lick. These types of collars are very effective against licking because the bandages can be wet when you are not available at home.

The waterproof bandages are effective when you are at home, but if you are a working human and your dog is alone at home, the wound is covered until you come home and uncover the wound to breathe.

You can also buy an inflatable collar online as well on amazon. Always buy according to the size of the dog and be sure about the measurements.

However, noninflatable collars are like a neck brace, which does not always limit the dogs from licking and turning to other body parts.

Dogs’ wounds are traditionally now treated by the Elizabethan collar. It is also known as e-collar or cone of shame. They are commonly used to treat wound damage and bandage removal to prevent the dog from licking.

However, using a hard plastic cone for the dogs is the standard consideration to prevent licking. Soft plastics cones are now also available in the market.

You can also buy an Elizabethan collar for dogs on Amazon.

The collar is long enough to cover the dog’s nose after placing it on the neck. Soft plastic cones are working better for some animals, but for big dogs like greyhounds, Dobermans and dachshunds remain a challenge.

You can cover the dog’s paw with boots or socks according to the size of the dog. The wounds on the belly or body can be covered with the t-shirts to prevent the wound from licking.

However, you can also use gaffa tape to prevent licking on the wound as it is easy to peel than other tapes. Remember not to put the tape directly on the fur.

There are also some anti-lick strips and spray for the dogs that are directly applied to the wound but have a lower success rate.

Always follow your vet’s advice- open wound addressing can be changed in two to three days.

Immediately consult the vet if you feel any smell on the bandage or pain, soreness, or swelling.

Keep an eye on the dog’s movement after any injury and bandage. You can also buy dogs’ boots on amazon.

Dogs lick pus or wounds to get relief from the pain. Dogs’ saliva has some antibacterial properties that can be effective on wounds but not always. However, sometimes licking on the scratch is common and not dangerous. You should limit the dog’s movement after an injury, especially after surgery stitches.

Dogs lick pus or wounds when the injury site is open, but you should stop them as there might be chances of the development of some other bacteria on the wound site. Immediately consult with the vet if your dog has a wound. Use the collars to prevent licking.