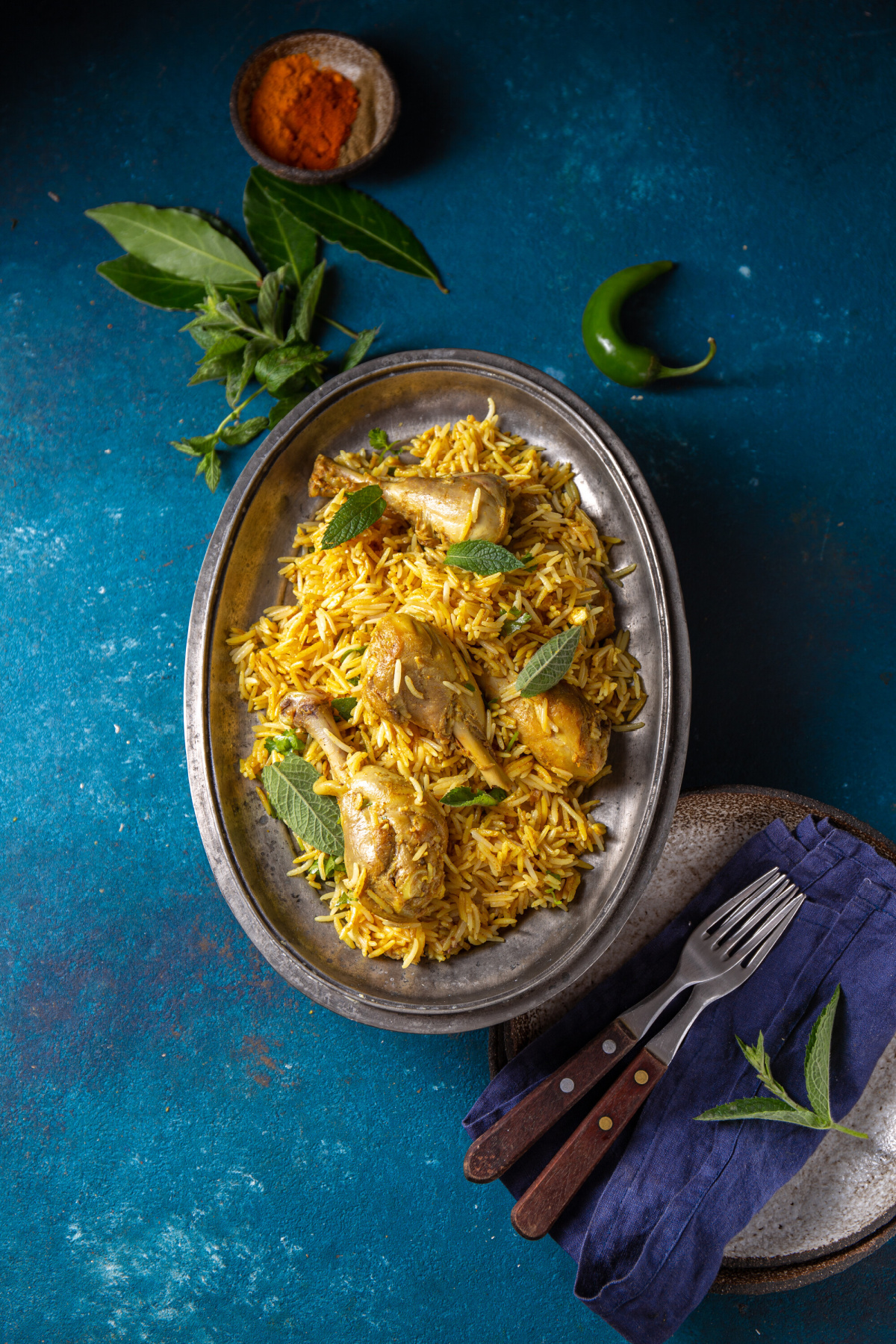 Most of us have had Indian food, but you also have to try some of the best traditional Pakistani dishes!

While Pakistan is technically a very young country, its people are descendants of multiple ancient civilizations.

The diversity of Pakistan’s inhabitants makes for an incredibly diverse cuisine as well.

A lot of what Pakistanis eat is similar to Indian cuisine, but there are spectacular dishes from the country’s north and northwest that lend Pakistani cuisine a wholly unique identity.

So, what makes up Pakistani cuisine? The obvious answers may be spicy biryani, savory pulao, and delicious kababs. However, that’s simply surface-level stuff.

To take a dive into just how diverse Pakistani food culture is, here’s a look at some of the best traditional Pakistani dishes and how to make them: 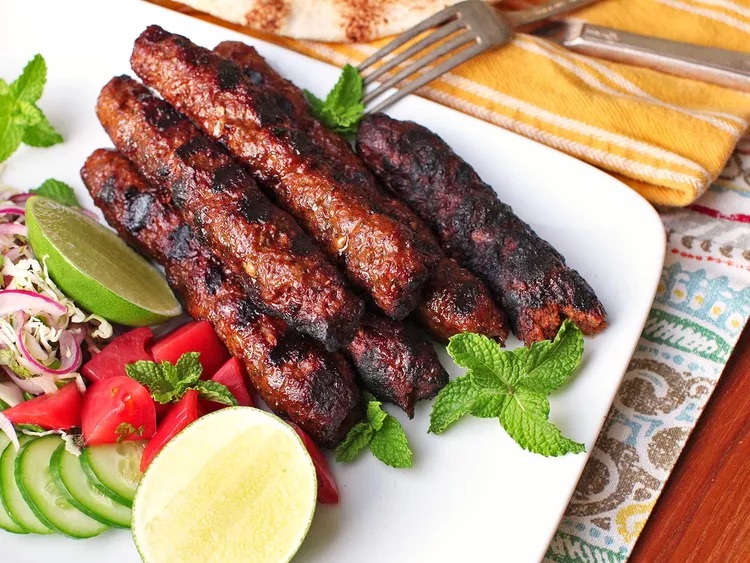 See recipe at Serious Eats and pin it here!

Pakistanis love their barbecue, and you are bound to see seekh kababs on every single barbecue pit.

They’re popular all around the country. Seekh means skewered, and these elongated kababs make for a delicious treat or snack at any time of the day.

Seekh kababs are made with ground beef or chicken. The meat has to be combined with a unique blend of spices and aromatics, including:

Obviously, you can add to the spice mixture as you like. Pakistanis love their spice, and they certainly wouldn’t mind spicy kababs.

You simply need to toast up the spices and grind them. Once that’s done, add them to the chopped vegetables and combine thoroughly with the ground meat to create what looks like a dough.

After that, all you have to do is shape the kababs and cook them however you like. You don’t have to limit yourself to a barbecue. Simply cooking the kababs on the stove works too. 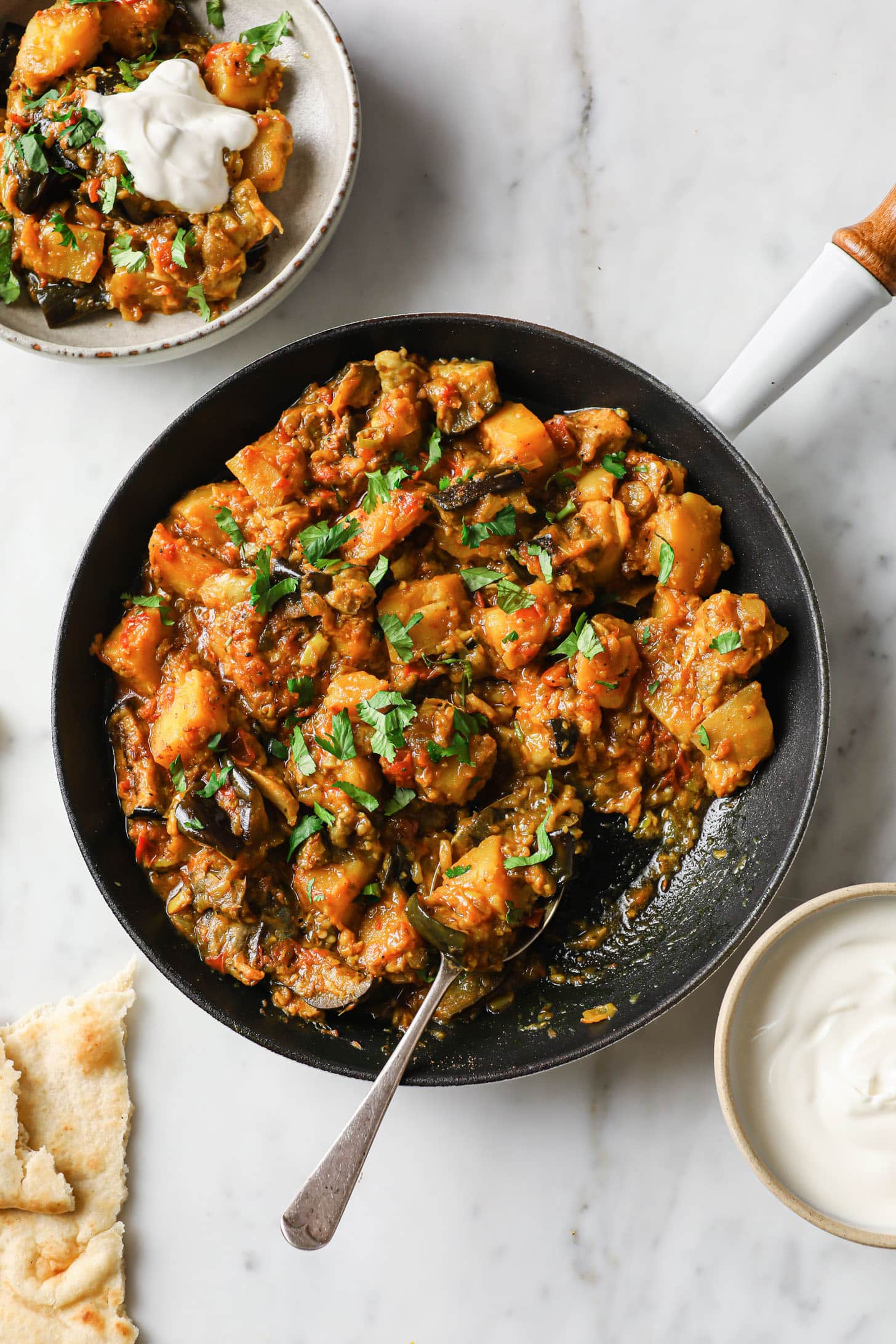 See recipe at Tea for Turmeric and pin it here!

Pakistani cuisine offers many delicious vegetarian foods, and aloo baingan is easily one of the most delicious things you’ll ever eat.

The simple curry comes from Western Pakistan and Northern India. It’s not as explosive or glamorous as the famous bangain bharta, but that doesn’t make aloo bangain any less delicious.

Once again, the spice mixture is entirely up to your taste. The dish is traditionally quite spicy, and you can experiment with it as much as you want.

Assembling this dish is quite simple. You simply have to cut the eggplant into small pieces and pan-fry them without fully cooking them. After that, you make your curry base by combining the vegetables and spice in a pan with oil, sautéing them carefully to break everything down into a runny paste.

Once your paste is simmering, simply add in the half-cooked eggplant and the potato pieces. Let them cook together inside the sauce. The cooking process ends depending on how you like your aloo bangain. You might want to maintain some shape or you might like them completely mushy. Either way, you’re about to eat a delicious, savory treat. 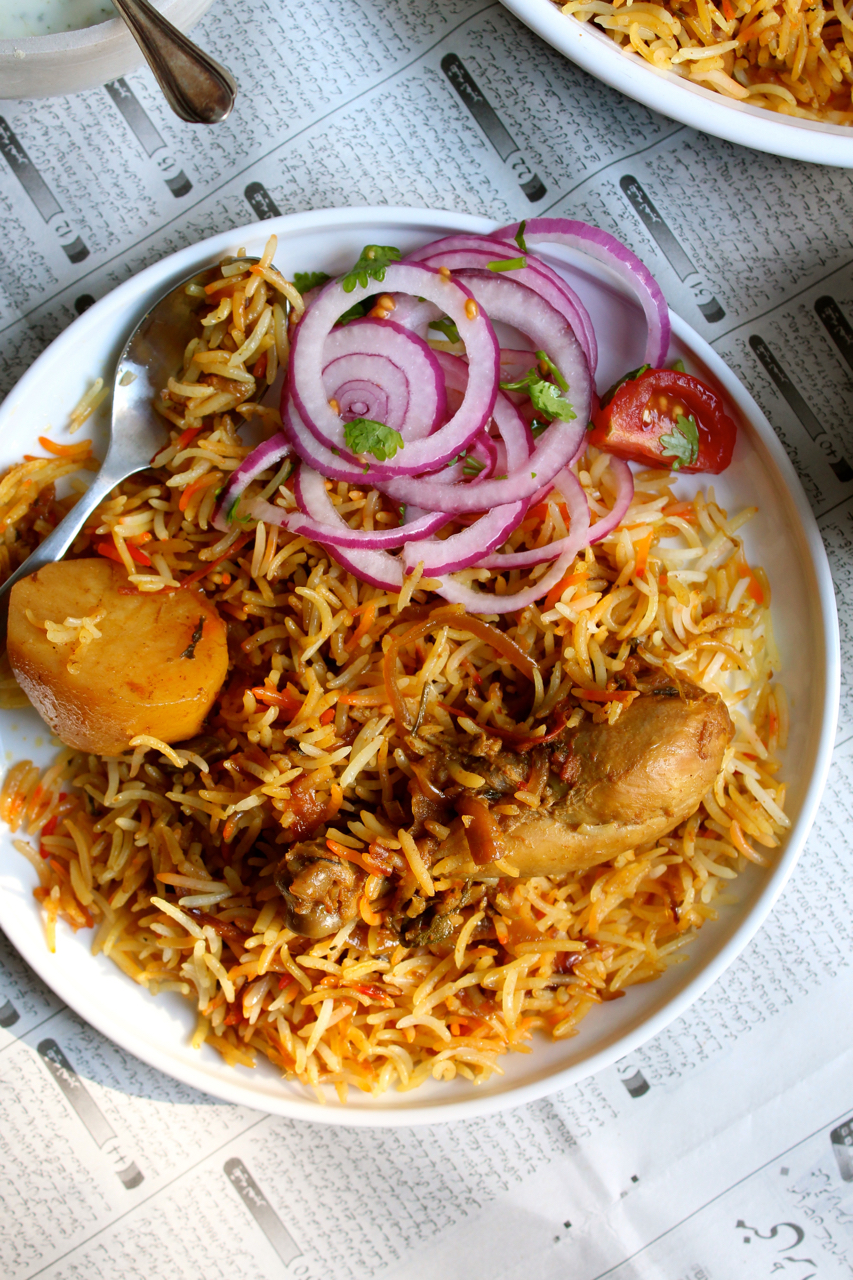 See recipe at Chai and Churros and pin it here!

If there’s any one dish that’s revered in nearly every corner of Pakistan, it’s the deliciously spicy chicken biryani. There are never-ending debates on which city makes the best biryani, with Karachi in the country’s south being the supposed champion.

The luxurious dish was a staple at banquets held at Mughal palaces and is often called a meal fit for emperors. It can be a complicated recipe due to the lengthy process, but it’s completely worth it at the very end.

You can make a distinct biryani masala by combining:

While this may look daunting, the preparation is easily the most complicated part of making chicken biryani.

Once you’re done marinating your chicken in the spice mixture, you have to cook it to make a curry.

While the curry’s simmering over low heat, you need to start cooking your rice. Only par-boil them, drain them, and set them aside for a while.

Once the chicken’s done, take a big pot and layer the half-cooked rice at the bottom.

Layer the chicken on top of that and finish off with another layer or rice and your whole spices and dried plums.

Let this steam together over low heat for a little while. This is called a “dum” and it allows the flavors to combine.

Kill the heat and simply combine the rice with the curry. What you’re left with is perhaps the best dish you’ll ever eat. 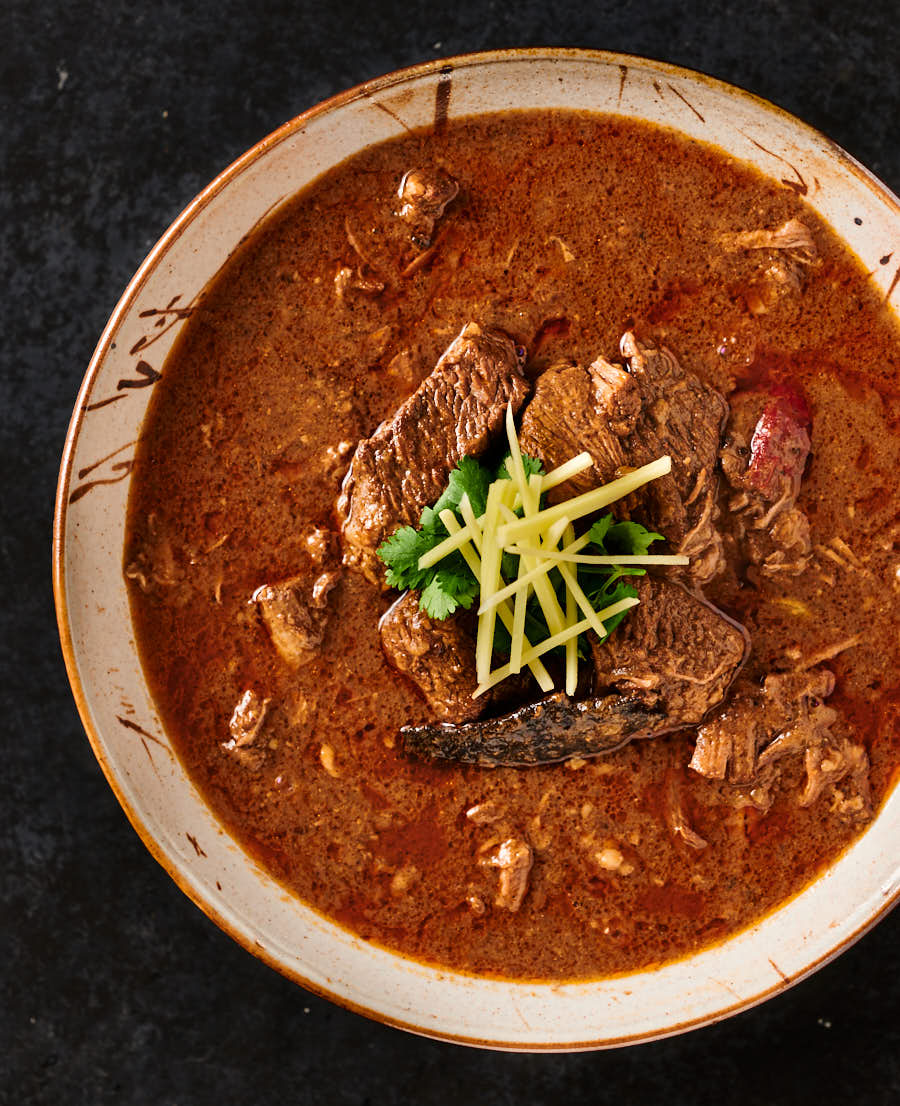 See recipe at Glebe Kitchen and pin it here!

Just like biryani, nihari is another dish fit for emperors.

Originating from Old Delhi, the slow-cooked meat stew is flavorful and filling, making it an ideal option any time of the day.

It’s a one-pot recipe that takes less than 30 minutes of preparation. More than that, it also doesn’t require an army of ingredients.

For the ideal beef nihari, you simply need:

While you can certainly make your nihari masala, it’s much simpler and more efficient to buy one at the store.

It’s not expensive by any means and saves you a ton of time. Beyond that, atta is easily the most confusing ingredient in the mix.

The flour is used to thicken up the stew, giving it the texture that makes it so popular.

The cooking process starts with browning the onions and meat together in a big pot.

Once that’s done, you can add in your spices and let them bloom along with the meat.

Once combined, add in water to fill up the pot and let the dish simmer for a while.

Finally, you need to remove some of the nihari liquid before you add the flour to thicken it. 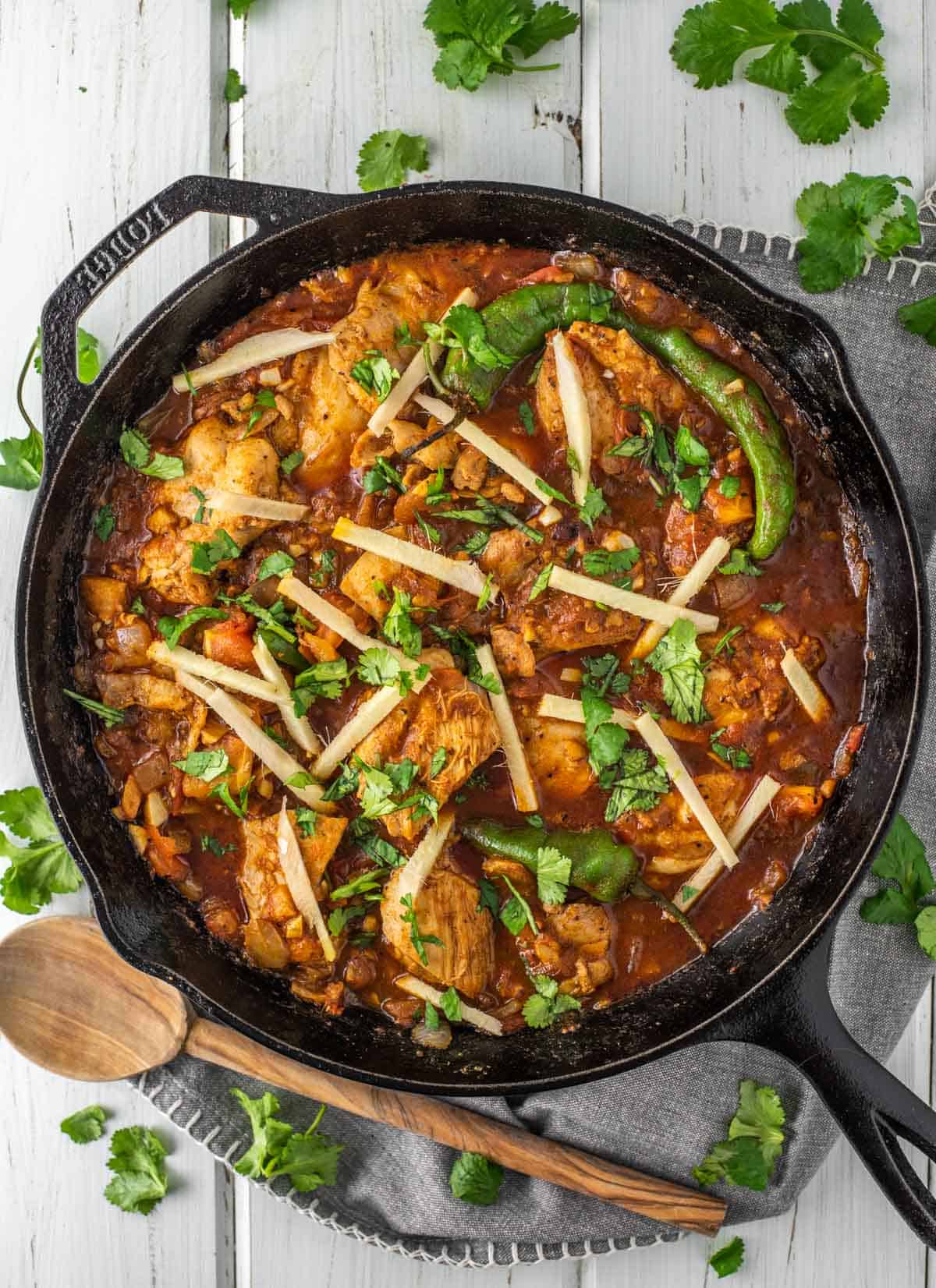 See recipe at Chisel & Fork and pin it here!

Pakistani street food is delicious, and you’ll often find one dish lining every single street of the country: chicken karahi.

Karahi is a local word for a special cast-iron pan. It’s quite like a wok, but has a flatter base and is rounder.

The dish originates from Khyber Pakhtunkhwa, the North-Western province.

However, it’s popular all around the country, with each province having its way of cooking the dish.

The cooking process involves browning the onions in oil at the very beginning. Into that, you add your chicken and let it cook for a while. Follow this up by adding the tomatoes and the spices.

The dish has a tomato base, so let the tomatoes reduce by covering the karahi and letting it simmer on low heat. This also tenderizes the chicken.

Take the lid off and stir fry the dish for a while before adding a touch of yogurt to make the tomato base a touch creamier. 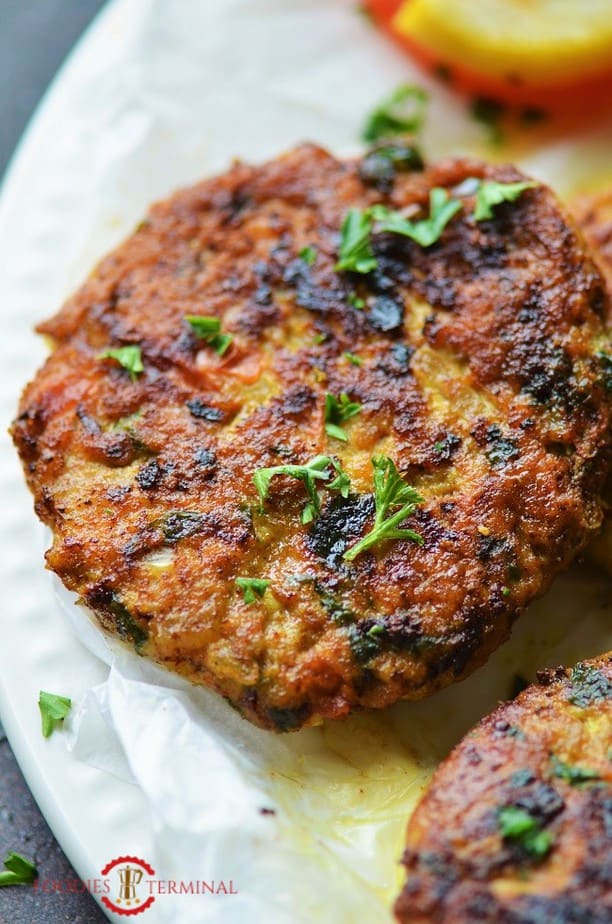 See recipe at Foodies Terminal and pin it here!

Chapli kabab is perhaps one of the best meat dishes you’ll ever have.

Originating from Peshawar in the country’s northwest, chapli kababs are of Afghani origin.

However, over the years, the dish has become popular all over the country simply because it’s one of the best ways to eat meat.

At the surface level, a chapli kabab is simply ground beef mixed with aromatics and spices.

It’s not as spicy as a seekh kabab, with the meat given a lot more room to shine in this. In fact, you can lay off the garam masala and other spices if you want.

With that in mind, the typical ingredients for a chapli kabab are:

Once again, you’ll have to grind the spices and combine them with the rest of the ingredients to make up a homogenous dough.

After that, it’s about shaping the dough into flat, circular kababs. Chapli kababs are cooked in a sea of oil, browning the exterior entirely and giving the kababs their distinct crispiness.

In Peshawar, street vendors usually cook it in beef fat instead of cooking oil. It’s simply a flavor explosion.