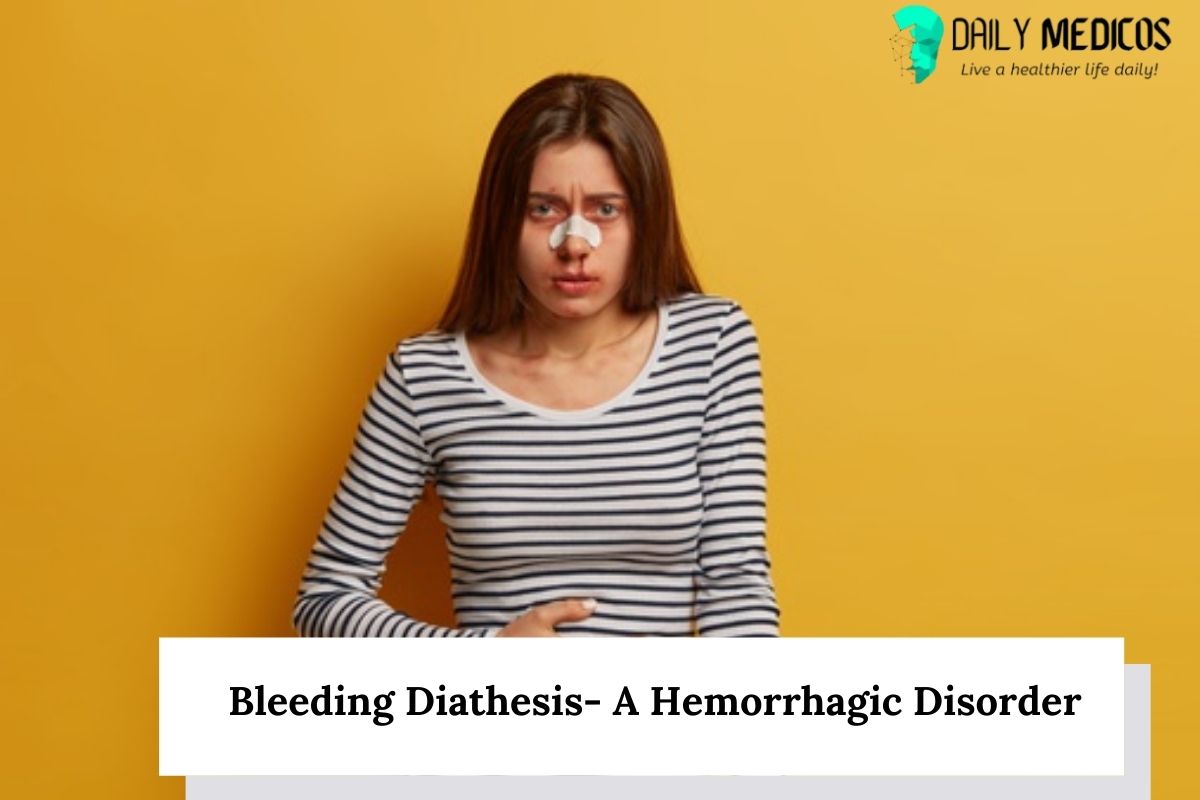 Hemophilia is the known inherited bleeding diathesis cause. In daily life, people experience a nose bleed, gum bleed, bruising from the hit, cut, etc. but more flow and flow for a long time repeatedly since childhood can be the sign of bleeding diathesis.

Normal hemostasis requires an interrelating and interconnecting mechanism consisting of vascular and tissue components, platelets, vitamins, and coagulation proteins. Deficiency or impairment of any of these components may prompt either spontaneous congenital or trauma-related hemorrhage disorder.

Bleeding diathesis is of great concern in pediatrics since the prevalence of congenital forms and the early expression of acquired ones appear. Bleeding diathesis or defect have been recognized with a heterogeneous group of clinical disease that differs from one another in etiology, pathogenesis, epidemiology, and incidence in the population.

OR Bleeding diathesis is a medical condition in which a person suffers from a bleeding disorder due to inherited or acquired causes. Most bleeding diathesis conditions occur when blood clotting factors do not work properly or get deficient in the body so the body is unable to heal.

The bleeding inclination may be mild, moderate/severe, localized /generalized, cutaneous/mucosal-cutaneous / mucosal,  and superficial /deep. Symptoms of bleeding diathesis can vary from mild to severe according to the disorder. Some of the general symptoms include:

Some genetically appeared symptoms include:

Hemorrhagic disorders may be categorized as;

1. Defects in the primary hemostasis

It comprises quantitative and qualitative abnormalities of platelets and vascular disorders. It is a genetic disorder that can lead to bleeding diathesis. Such as;

It involve intravascular disorders (blood coagulation deficiency). It can be the adaptive causes which can be acquired from the environment, having an unhealthy lifestyle, malnutrition, excessive use of drug, medication, or therapy, and herbal preparation. It includes;

In coagulation factor deficiency the hemostatic plug cannot be condensed by fibrin that’ why spontaneous hematomas, hemarthrosis, and ecchymoses often occur.

A deficient or late hemostatic plug in small vessels can induce superficial or interstitial bleeding that may be intracutaneously or intramucosal and appear as purpura; a bruise.

Careful medical and family history and clinical examination are essential in the diagnosis of bleeding diathesis. The history of the patient should be taken know:

2. To know the form of hereditary transmission (family history)

3. To know exactly the disorder’s start and the mutual association with former or accompanying disease

4. Interactive relation with drugs or medications, herbal preparations, or supplements you’re practicing, including aspirin or NSAIDs.

Afterward, a careful physical examination should be done to look for skin abnormalities, such as purpura (colored bruises) and petechiae (little red spot rashes).

The initial laboratory workup for screening patients with bleeding disorders should include;

This series of tests determine the general area of the defect or abnormalities in platelets number or function or congenital defect of one or more clotting factors activity.

What can be the treatment of bleeding diathesis?

Bleeding diathesis therapy and medicine depend on the type and the severity of the disorder. For many years synthetic medication for raising and decreasing blood factors to improve blood disorder has dramatically used, such as;

But The pathology itself and the therapy certainly can often interfere with the growing-up patients.

Research in 2018 recommends treating blood diathesis with anticoagulant; when an anticoagulant drug is linked with constant intravenous protamine sulfate. And  Heavy menstrual bleeding (menorrhagia) may be managed with hormone treatments, including birth control pills.

Proper and early detection and treatment can overcome bleeding diathesis conditions. And the person can live a healthy and normal life.