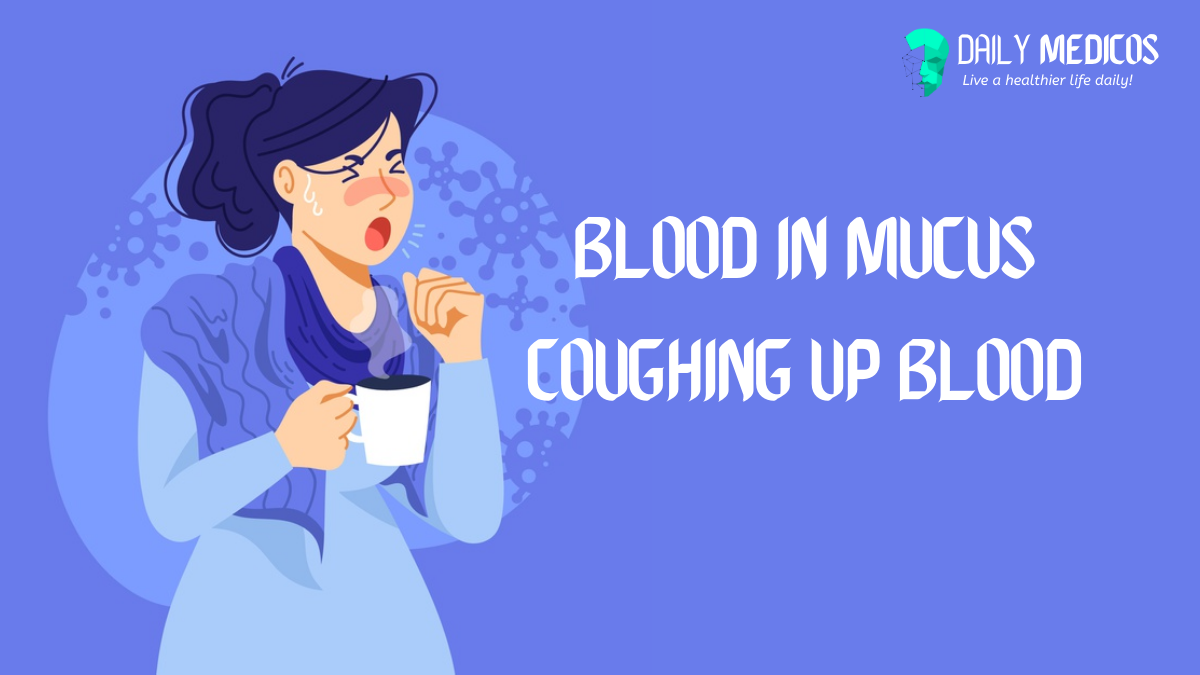 The medical term for coughing up blood is haemoptysis. One mighty cough out small amounts of red blood, or frothy blood-streaked sputum (phlegm). Blood in mucus can show a number of possible diseases.

Mucus is produced from two distinct regions within our lungs and lungs tissues. Mucus is sticky and it traps the polluted dust. In the surface of the epithelium, there are mucus produced cells known as goblet cells.

When a person coughs continuously, little or bulk of blood comes in mucus known as hemoptysis. Hemoptysis is coughing up blood with Excess amounts of blood in the mucus. In other words, our airway starts bleeding. In many cases, blood in mucus results in lung cancer, a complete evaluation of lung is required.

In this article, we’ll discuss about the causes, diagnosis, alarming conditions and also how we can prevent this.

From where Blood in comes?

Commonly the blood arises from different parts of our body but bloody phlegm has four main sources,

What does the color of bloody phlegm mean?

(This is the hint of a serious condition)

There are diverse causes of the production of blood in our mucus.

Often the cough is avoidable but when you have prolonged or severe type of cough it may be a sign of the serious condition. This may cause due to infection, cancer and problems in blood vessels of lungs.

Bronchitis is inflammation of the lining of the bronchial tubes, carries air to and from the lungs. Patients with bronchitis also have trouble an excessive amount of mucus from the airway.

The main cause of nose bleed is broken of blood vessels. In medical terminology nosebleeds is termed as Epistaxis.

Yes, sinusitis is a sign of bloody phlegm. Sinus is lined with a mucus membrane that lines the rest of the respiratory system. Mostly sinusitis is caused by infections (either they are bacterial or viral), swelling and any allergic reactions. When swelling or inflammation halt the drainage and cause mucus to build, then as a result congestion occurs, whereas sinuses are incapable to drain.

Is blood in mucus is serious?

Sometimes coughing with blood is a considerable condition for older peoples, mostly its common in the adult population. The typical patient is around age of 60 or male mostly targeted. But it is not a sign of serious condition for young or teenage persons. In spite of they are not a smoker because it’s also an alarming condition for smokers.

These are the serious causes of blood-tinged phlegm.

Can Drugs-induced cause blood in your mucus?

Even though induced by a drug is a less common cause of bloody phlegm but it may happen due to many reasons. Drugs that cause hemoptysis entail NSAIDS it may include (Ibuprofen, Naproxen), anticoagulant, antiplatelets.

Misuse of cocaine also causes health-related problems. One of them a main risk factor of blood in mucus is cocaine because cocaine stops the body reaction which makes the blood thinner, it should increase the risk of bleeding.

Usage of cocaine gives pleasant and people act energetically but in actual it may cause severe damage to all body parts and leads to bleeding in lungs, spleen, GI and intestine.

When to see a doctor?

Visit a doctor or explore urgent care when you see a coughing with lots of blood, or with a particular interval of time.

If your blood color is dark and it may come out with a piece of food it is a serious condition. You should go to the hospital, immediately.

If you see other symptoms that lead to blood in sputum, you may also concern with your doctor, Such as

To identify the cause of blood appears in phlegm, foremost your doctor take your past medical history then they’ll examine you properly and ask about

Your doctor also identifies the location of bleeding by the color and texture of your phlegm.

In some serious conditions further, the examination is necessary. This may includes

Chest X-ray: This is generally one of the first imaging investigations, your doctor does because chest X-ray diagnosing a variety of conditions.

Bronchoscopy: To examine bronchus and lower bronchus abnormalities, or to check your airway obstructions.

If your doctor finds any structural abnormalities than they also instruct to perform a biopsy.

How to prevent bloody mucus?

Blood-tinged sputum sometimes is unavoidable, but with the help of prevention in many cases we control it. The first line of prevention to cure bloody mucus is to treat respiratory infections or any obstruction.

You can also do the following preventions to cure Blood-tinged phlegm.

Blood in sputum is produced when our lungs are damaged by an infection, lung injuries or any diseases related to our respiratory tract. But after implementation of the above-given prevention we can control it so try to avoid those things which can cause blood in your mucus.