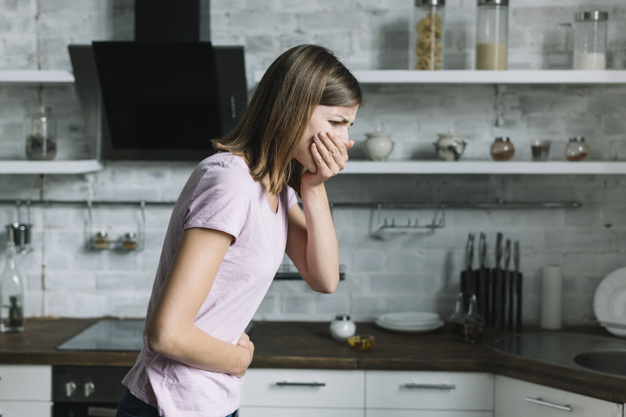 The first thing you want is to relieve the pain. The good news is that most people get better without any treatment and it recovers on its own, eventually few are facing mild to severe cramps and it usually goes away in a few days.

Food poisoning is also named a food-borne illness. Food poisoning happens when you eat or drink something that carries harmful germs (such as bacteria, viruses, or parasites).

Bacteria manufacture toxins (poisons of plants and animal origin, produced by microorganisms) in your food, and these toxins cause the problem. Food poisoning is caused by vomiting and diarrhea, and often this condition is resolved on its own, while the dehydration or imbalance of electrolytes may develop and your stomach gets upset.

According to Centres For Disease Control CDC, 45-48 million people are ill due to food poisoning and the most common type of food poisoning bacteria are, Norovirus, Clostridium perfringens, staphylococcus aureus, salmonella, and campylobacter.

Countless cases of viral gastroenteritis (inflammation of the stomach) happen when many people have been eating, it is surely considered as food poisoning. Norovirus is also named Norwalk virus and it refers to a group of viruses that are found in your stool, vomiting, or infecting an individual.

This virus is tremendously contagious but not lethal and mostly passes after one or two days. The symptoms which appear due to this virus are vomiting, diarrhea, or cramping of the stomach.

Clostridium is mostly found in the soil and in the intestines of animals (including poultries, cattle, fish, and humans). Food poisoning is caused by clostridium bacteria is important to know because these bacteria are commonly found in the environment.

An individual can get clostridium food poisoning due to poor food handling practices in the home, in factories, or in a food outlet, mostly relating to cooking, storage, and refrigeration temperatures.
The symptoms of clostridium food poisoning appear about 12 hours after eating the contaminated (dirty) food and it may include pain, diarrhea, and sometimes nausea and vomiting.

Staphylococcus bacteria are commonly found on your skin, sores (canker sores), infected eyes, in the nose, throat, saliva, and bowel of humans. Their bacteria appear in the yellow mucus which comes from your nose or coughs up when a person has a cold or any lung infections.

Staphylococci bacteria usually do not cause illness until they get on your food than grow and multiply itself. However, they produce a toxin (poison) and this toxin causes the illness. The toxin is generally not destroyed by cooking the food.

Symptoms of staphylococcus bacteria in food poisoning appear between 1-8 hours after eating the infected food.

There are numerous different types of salmonella bacteria but not all salmonella are harmful to human health. Salmonella is found mainly in the intestines, bowels, and feces of humans and animals. An individual can get salmonella food poisoning because of:

Salmonella food poisoning usually takes up to 48 hours to develop or grow after eating food, and it may include nausea, stomach cramps, diarrhea, headache, or fever, or it may last for 3-30days.

The campylobacter bacteria are mostly found in many animals (including dogs, cats, cattle, and poultry). The sources of infection from campylobacter are usually contaminated food and water. An individual get this campylobacter food poisoning bacteria from:

Some bacteria from food poisoning cause serious illness and make you very sick, and can even cause death. These are:

Escherichia coli is a type of bacteria that is found in the intestines of animals. You can also get this from undercooked ground beef, unpasteurized milk (which is not pasteurized to kill dangerous bacteria), sprouts, or any food or liquid that has contact with animal feces or sewage. E.coli bacteria lead to severe food poisoning which harms human immunity and sometimes it may lead to death.

Listeria is a foodborne illness and also named listeriosis and it may not show any signs for a couple of weeks. Listeria is an unusual bacterium and it can grow in cold temperatures (such as in the refrigerator). Listeria is found in smoked fish, raw (unpasteurized) cheeses, and ice cream.  An individual with listeria had to face fever, vomiting, and gastrointestinal pain.

The microbes (organisms that cause diseases) are spread to food at any time while the food is grown, harvested, processed, stored, or prepared. The harmful microbes already are present in your food when you buy them.

The foods that contain microbes include fresh produce, raw or under-cooked meat, dairy products, fresh juices (that have not been pasteurized), processed and ready-to-eat meats (such as hot dogs, and foods that are not properly sealed and it may cause food poisoning). To prevent these microbes you may cover the food well properly, cook your food properly, and keep your food in refrigerators.

What Symptoms appear when you have Food Poisoning?

Some serious long-term effects correlated with several types of food poisoning and it may include,

How to prevent Food poisoning?

You can take a few simple and easy steps to avoid or stay away from food poisoning:

Most food poisoning is mild and clears up in a few hours or days. Large amounts of electrolytes and fluids are lost through diarrhea and vomiting. To treat food poisoning you can do the following:

When to call a doctor?

Food poisoning is a reaction due to contaminated food, or water during improper cooking, handling, or storage. The most common type of bacteria, such as salmonella, Campylobacter, and E. coli, and other contaminants including viruses, parasites, and toxins can cause food poisoning. Food poisoning usually leads to diarrhea, vomiting, and electrolyte imbalance but it may cure by handling proper hygiene, and drinking plenty of water to balance your electrolytes.