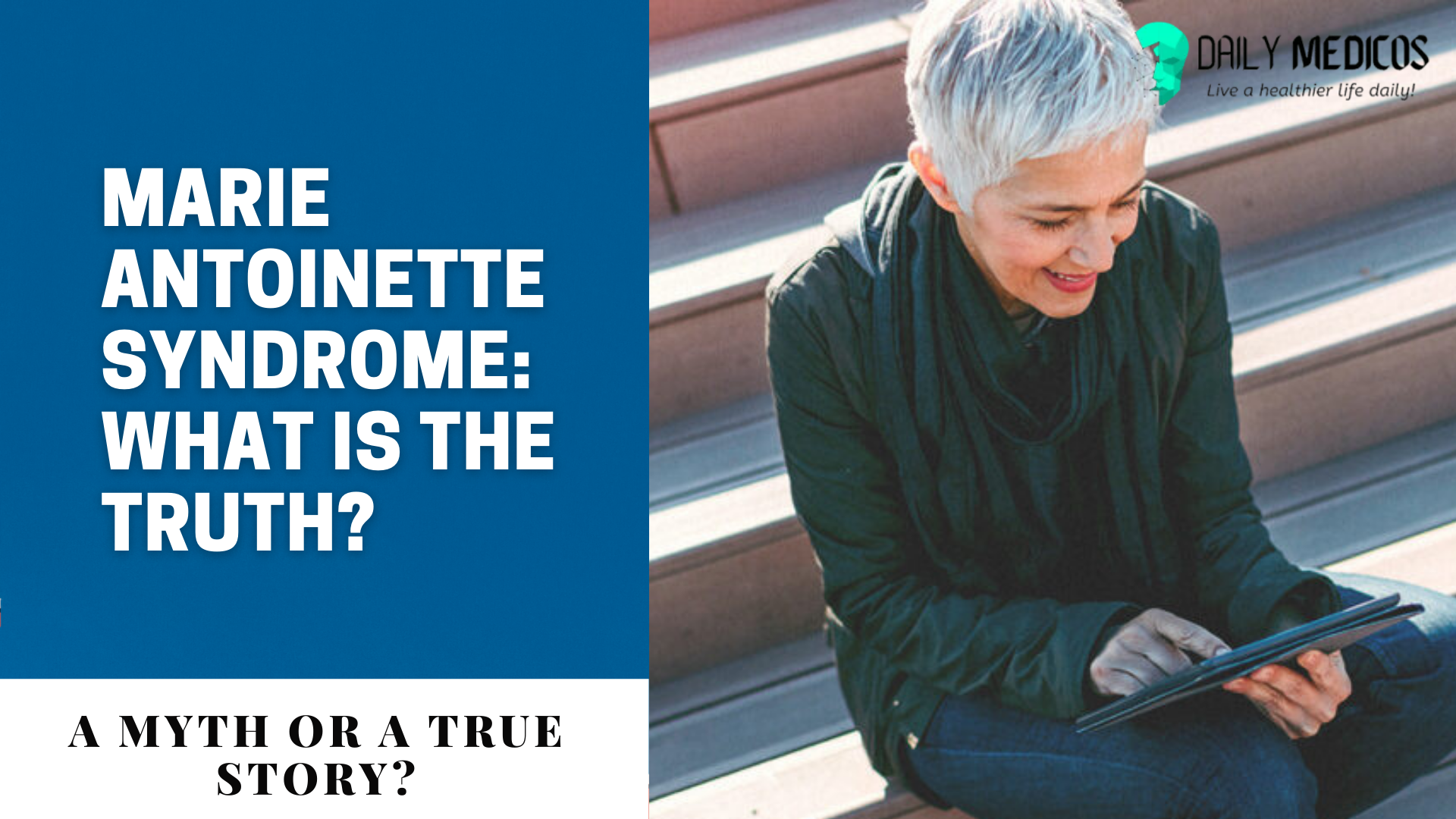 Marie Antoinette Syndrome refers to a condition where a person’s hair starts to turn white suddenly, out of the blue. There are certain myths related to Marie Antoinette syndrome, however, to make it easier to understand we will be talking about the syndrome in detail.

The Marie Antoinette Syndrome name is adopted by a French queen, Marie Antoinette who noticed that her hair started to turn white all of a sudden just days before her execution in 1973. However, this is believed to be folklore but some people say that it may be authentic to some extent. This condition is also known as canities.

To check Marie Antoinette syndrome’s authenticity, there were several experiments performed. Likewise, Zhang et al performed an experiment on mice. The normal process of the human body shows that the hair turns gray once the person reaches a certain age as the melanin pigments that help hair to stay black starts to reduce. However, the experiment showed how acute stress in conjunction with a reduced rate of melanocyte stem cells can cause hair to turn gray.

So when a person has Marie Antoinette syndrome, age is not a factor in turning the hair white. So whether the story about the French queen, Marie Antoinette, is true or not is still unclear, but she was only 38 years old when she died.

There is no such concept of sudden hair whiteness, logically and even in history. However, such folklore has been a part of our childhood and we have been hearing tales of such incidents since long.

Along with the ill-famed Marie Anotinette, other famous figures have also experienced sudden hair color changes. Let’s talk a little about history, Thomas More was said to experience sudden whitening of hair before he was executed in 1535.

Written in MetroWest Daily News by Dr. Feingold, the research is concluded by stating that no such research has been able to prove that losing hair color overnight is a possibility.

However, another article posted in the Journal of the Royal Society of Medicine stated that there have been several historical witness accounts on the sudden whitening of hair caused due to Alopecia Areata or hair dyes washing out temporarily.

Related Similar Phenomena And Their Causes

Autoimmune Disorder is seen to be blamed for the so-called cases of marie antoinette syndrome. It is said that these cases are the result of autoimmune disorder as such conditions can change the way the human body reacts and responds to healthy cells, which can make it attack them.

Some of the commonly mistaken conditions are mentioned below:

Alopecia Areata is widely known for baldness patterns. These pattern baldness could be due to underlying inflammation of the scalp. As a result of this scalp inflammation, hair follicles stop growing new hair, or even sometimes cause the existing hair to fall out.  So a person who already has gray or white hair, Alopecia Areata can make pigment loss look more prominent. Subsequently creating an impression of new pigment loss, that in reality is just more visible now. If taken the right treatment, new hair growth can make the white hair but gradually, your hair can turn gray.

Another factor that can be mistaken for Marie Antoinette Syndrome is genetics. Having a family history of gray hair can put you at risk too. If you have a history of gray hair, there are high chances that your hair will turn gray too. As mentioned in the Mayo Clinic, IFR4, a gene, could also play a role. The hereditary attitude to the turning gray hair causes certain difficulties in switching the adjustments in hair tone.

If you have any hormonal imbalance like thyroid disease, menopause, or a decrease in testosterone levels, there are chances of you experiencing hair whitening. If you visit a doctor, he can prescribe you the correct medication to help you balance your hormone levels and reduce / stop further graying or whitening of hair.

If you have naturally dark and light hair colors, your hair is more likely at risk of graying. In case of dark hair, any kind of hair graying or whitening will look more prominent as compared to light hair tones. Since these are natural hair colorings, these cases are not reversibles. However, root touch-ups or hair dying can help solve the problem to a certain extent. As mentioned in the research of the Nemours Foundation, in such cases, hair graying is not a sudden event, it can sometimes take over a decade for every hair strand to turn gray.

Another factor that contributes towards graying of hair is a lack of vitamin B – 12. However, you can reverse nutrition based graying of hair by taking sufficient nutrients to fulfill the deficiency. In order to be sure, visit a doctor and get a blood test done to confirm such deficiencies.

An autoimmune disorder, vitiligo results in skin pigmentation loss that result in white patches on the skin. As a result, such effects can also cause your hair pigment loss that can eventually turn your hair gray. Vitiligo treatment is difficult, especially if found in children. However, there are a few treatment options available such as corticosteroids, surgery, and light therapy. Once done, treatment can impede the depigmentation process and there will be a noticeable change in lesser gray hair.

Can Stress Be One Of The Contributors?

If we look back historically, sudden stress was blamed to be the cause of sudden hair whitening or the Marie Antoinette Syndrome. For instance in the case of Thomas More and Marie Antoinette, their hair color changed to gray suddenly during the final days of their life before their execution in prison.

Still, the true causes of hair whitening are much more complex than to be blamed on a single event. In reality, the changes in hair tone are doubtlessly being caused because of other hidden causes.

Stress as a single factor can not be blamed for the sudden whitening of hair. However, chronic stress may cause premature gray hairs, over a period of time. Severe stress can also make your hair fall out.

When To Visit A Doctor?

Sudden or over time whitening of hair is not necessarily a medical emergency or a health concern. However, if you start to notice premature gray hair, you can consult with a doctor at your next physical visit. In case you are experiencing other symptoms along with hair whitenings such as hair loss, bald patches, or rashes, we suggest you book a medical appointment as soon as possible. Consulting your doctor regarding such symptoms can be the best available choice.

As per the available information about marie antoinette syndrome in the fictional world, it is caused by high emotional stress levels. This happens because stress tends to lessen the pigmentation of the hair.

There is no such successful medical research regarding the myth of hair turning white suddenly overnight. It is not medically possible for hair to turn white even in an injury, Allen, or any kind of fear/shock.

Can Hair Whitening Due To High Stress Level Be Reversed?

Yes, some medical researches show that if hair turns white due to stress, they can regain their pigmentation once the stressful event ends.

What Kind Of Vitamins Can Help Restoration Of Hair Pigmentation?

If you lose hair pigmentation due to vitamin deficiency, Vitamin B-6 and B-12 can help restore hair to its natural color as it helps in promoting healthy skin.

Hair whitening or premature graying of hair does cause one to be concerned. However, hair can not turn white overnight except for folklore such as Marie Antoinette and Thomas More’s. So divert your focus from such historical stories to what medical experts have to say about the whitening of hair and learn from their research, studies, and investigations as they are based on logical reasoning and medical searches!